GeoLibrary Gets Its Soft Launch

The University Libraries are pleased to share the GeoLibrary, a new collection of Colorado Geographic Information System (GIS) data, now available online to the public.

“Anyone can use it for their research, their mapping projects, it’s a place to go for GIS data,” said Philip White, an Earth Sciences and Environment Librarian. 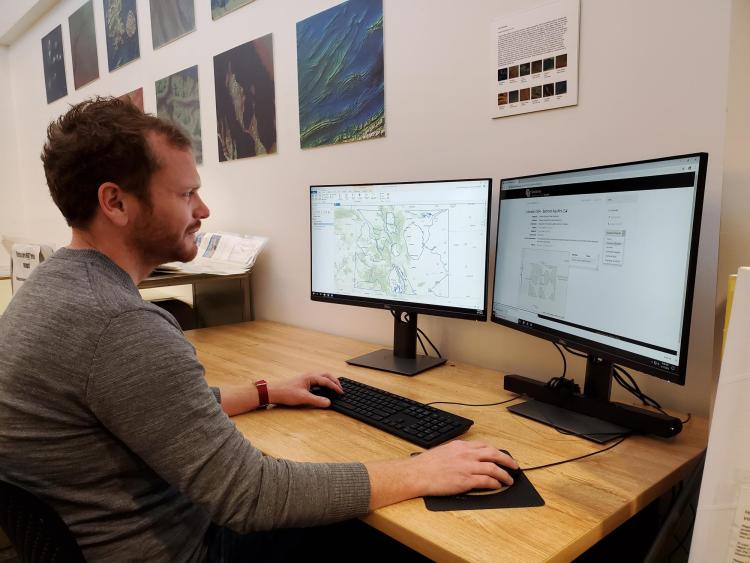 White spearheaded the project and has been working on it for over two years. He said he recognized the need for a system like this and wanted the University of Colorado Boulder to champion it.

"This is the first time Colorado has one depot for GIS spatial data comprised of data gathered from entities throughout the state that serves to encompass all elements of the state," he said.

The GeoLibrary assists the Libraries and campus in the university's overarching mission of supporting research, student learning, and providing a public service of making information accessible.

“It’s helpful for people around the state not just in our institution, but hopefully students and researchers will start to use it for their work,” he said.

With the GeoLibrary portal, researchers can type in “boundaries,” and all major boundaries in the state will show up on the map. Same with subjects like “hydrology."

White anticipates that by the time of the program’s hard launch this fall, the GeoLibrary will have doubled the natural and cultural content features it has now, and the building won’t end there.

Researchers from the Sciences, CRDDS, ODSS, LIT, Metadata, and Administration were also instrumental in making the project work. Metadata Librarian Erik Radio began working on the GeoLibrary in December 2018. He, Metadata Coordinator Helen Baer, and Metadata Technician Katie Fletcher worked with Digital Library Software Architect Mark Stacy to upload data sets into the GeoLibrary and then map the geospatial metadata standards that would be beneficial for users.

“I think this work is so important because a lot of time and resources go into making these datasets, and we want to make sure we are describing them to the best of our ability and for varied audiences,” said Radio. “Similarly, government data, which is currently the bulk of what is in the GeoLibrary, can be at risk due to budget cuts and other factors, and the GeoLibrary ensure that these important datasets have a more sustainable future.”

Though the GIS-data system is meant for geographic sites in Colorado, White said the GeoLibrary team is open to suggestions of data to add to the collection and collaborating with professors to include research data sets.

White said he sees real potential in expanding the data collection based on our students’ and researchers’ needs.

The GeoLibrary is available to explore at geo.colorado.edu.