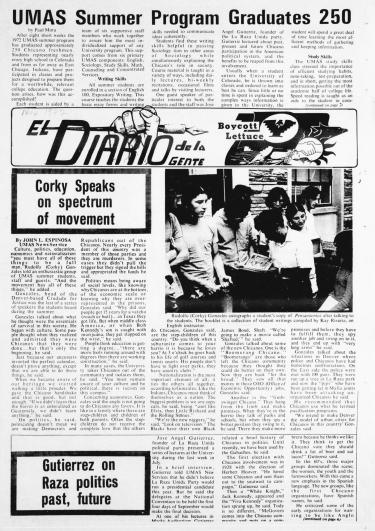 Two of the University of Colorado Boulder’s historic university newspapers have been digitized by the Colorado State Library. “El Diario de la Gente” and early issues of “Silver and Gold” are available online from the Colorado Historic Newspapers Collection (CHNC).

“We are thrilled to have had the opportunity to collaborate with the Colorado State Library to make these two newspapers available digitally,” said Megan Friedel, head of Archives for the University Libraries. “Both are incredibly rich primary sources documenting both campus and Colorado history that will be used by students and researchers for years to come.”

CHNC is an open-access service provided by the Colorado State Library. It currently includes more than 1,400,000 digitized pages, representing more than 335 individual newspaper titles published in Colorado dating back to 1859.

The United Mexican American Students (UMAS) group at CU Boulder founded El Diario de la Gente 1972. The student newspaper was committed to reporting on Chicano student activities and the movement for Chicano civil and educational rights on campus, and throughout Colorado and the U.S.

El Diario published 63 issues between October 1972 and April 1983, all of which have been digitized and are fully searchable through the CHNC. These issues are incredibly significant in that they document “El Movimiento,” the fight for Chicano civil rights, which reached its peak in the 1970s.

“We’re especially excited about the digitization of El Diario,” said Friedel, “as it’s a window in time into the heart of the fight for Chicano civil rights in our state and on the CU Boulder campus."

This comes after last month’s UMAS 50th anniversary exhibit reception which took place at the University Libraries. Over 50 students, faculty, and alumni attended the event, which commemorated the student group’s legacy and celebrated the current member’s plans for its future.

The students reported on touchpoint moments in that history, such as the Equal Opportunity Program and Migrant Action Program, which allowed hundreds of first-generation Mexican American students to attend CU Boulder, the deaths of activist Ricardo Falcon and Los Seis de Boulder, and visits to campus from activists such as Angela Davis and Crusade for Justice founder Corky Gonzales.

Also digitized for the CHNC are 390 early issues of CU Boulder’s first student newspaper, the Silver and Gold. These issues date from 1892-1906, and the Colorado State Library plans to add more issues in the future as they have funding.