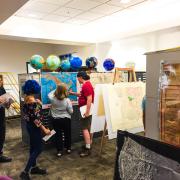 “Maps can reveal unspoken biases, prejudices, political stances and dreams for the society that makes them,” said Young. ”They are a snapshot of a time or era in history, for in truth, all of the assignments we give to maps, borders, attributes, etc. are arbitrary and subjective.”

Young’s students viewed historical U.S. government maps of the Southwest and maps created by indigenous cartographers. Young provided his students with context for examining the maps by offering a short history refresher for the time period of each map. CU Boulder map librarians, Naomi Heiser and Ilene Raynes added to this lesson by helping students improve their ability to skillfully interpret and analyze maps.

After examining a wide variety of maps, with different themes and messages, students were asked to summarize which map was most compelling to them and why. One of the students in the class, in reflection, said, "I liked going to the map library. I didn't know that maps had more information than just geography. I learned that every map has more information in it about where Indian people lived, what languages they spoke and what was happening when the map was made." 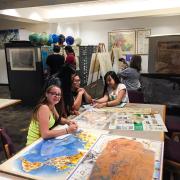 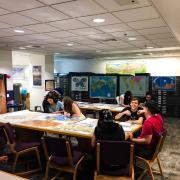 One of Young’s students reported that before the class, she had no interest in maps. But, she liked the governmental reports and maps so much, she has taken a bigger interest in anthropology and the study of indigenous peoples. She plans to include maps as a part of her college studies.