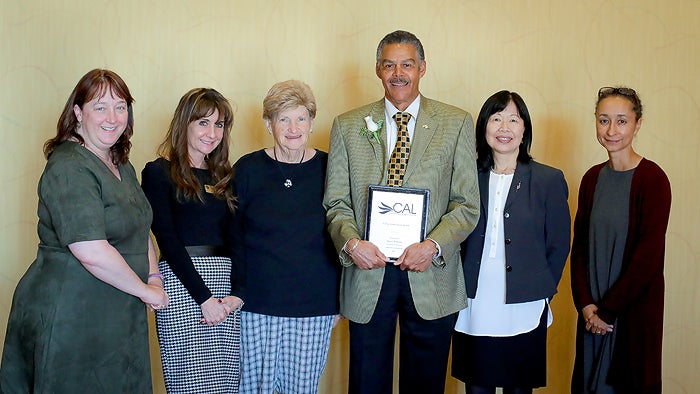 The annual award honors a Colorado librarian who has demonstrated continuous commitment and dedication to the library profession, with significant contributions nationally and internationally. Williams was nominated by Leslie Reynolds, interim dean of the libraries, and Jennifer Knievel, acting senior associate dean, for nearly 30 years of leadership as Dean of the Libraries at the University of Colorado Boulder.

"In a world where libraries are no longer a storehouse of knowledge unavailable elsewhere, we have redefined ourselves as information managers and research service providers, guiding current and future scholars through the din in this age of information noise," wrote Knievel. "It was through Dean William’s careful, diligent and imaginative leadership that this redefinition and transformation has been possible. Thanks to his courageous advocacy, the University Libraries have thrived as a vital component of research and education at the University of Colorado."

Stein Sture, vice chancellor of research emeritus, in a letter of support, described Williams as "a dedicated, enthusiastic, resourceful and demanding mentor, and an exceptionally visionary scholar."

Additional letters of support were received from current and past faculty and staff: Deborah Hollis, Yem Fong, Barbara Black, John Stevenson, Scott Seaman, currently Dean of the Libraries at the University of Ohio, and John Culshaw, now University Librarian at the University of Iowa. Seaman and Culshaw both previously served under Williams as associate deans.

You can learn more about Williams' distinguished career in our retrospective essay or from his Q&A with CU Boulder Today. Find more photos from the award reception in our Flickr CALCON17 album.