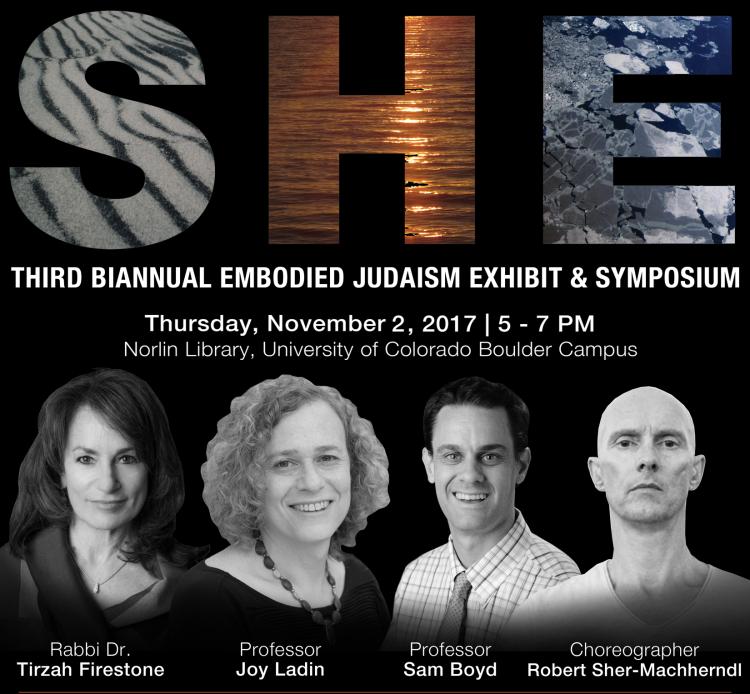 The University of Colorado Boulder’s Program in Jewish Studies and University Libraries’ Special Collections and Archives are pleased to present SHE: Third Biannual Embodied Judaism Symposium. The symposium will take place on Thursday, November 2, 2017 from 5-7 p.m. in Norlin Library on CU Boulder’s campus. Space is limited. RSVPs are required to CUJewishStudies@colorado.edu.

The biannual Embodied Judaism series explores the role of the body in Jewish life through public gatherings and multimedia exhibits aimed at academic and non-academic audiences, drawing on materials in the Post-Holocaust American Judaism Collections held at CU Boulder. This year, the symposium and exhibit will explore the idea of the Shekhinah.

Who is She? The Shekhinah, which derives from the Hebrew word for "dwell or settle," is a feminine divine presence, guiding and protecting men and women everywhere. She is power, wisdom, and compassion and has influenced Jews from the ancient world through Second and Third Wave feminism and into the transgender and environmental concerns of the present day. Who is She, how has She empowered us, and how does She appear to us today?

SHE: Embodied Judaism Symposium will feature insight and embodied presentations from leading scholars and practitioners from across the US, as well as an original dance performance.

Rabbi Dr. Tirzah Firestone is an author, psychotherapist, and founding rabbi of Congregation Nevei Kodesh in Boulder, CO. She is widely known for her groundbreaking work on Kabbalah and depth psychology and the re-integration of the feminine wisdom tradition within Judaism. Her presentation, “She Who Dwells Below,” will look at the feminine wisdom of the Shekhinah that has flowed through and appeared in Jewish history for over 2,000 years.

Professor Joy Ladin, the David and Ruth Gottesman Chair in English at Stern College of Yeshiva University, is a teacher, published essayist and poet, literary scholar, and speaker on transgender issues. She is the first openly transgender professor at an Orthodox Jewish institution. In her presentation, “When I Grow Up, I Want to Be the Shekhinah: An Annotated Poetry Reading,” Professor Ladin will read and discuss poems that dramatize the role of the Shekhinah in her gender transition, her development as a poet, and her growth as a human being.

Professor Samuel Boyd is an assistant professor of Religious Studies and Jewish Studies at the University of Colorado Boulder. His talk, “’Herstory’: A brief history of the Shekhinah,” will explore the historical backgrounds of the Shekhinah, showing how the concept of female divine presence appears in ancient Near Eastern texts, iconography, and religious practice. Professor Boyd will trace this cultural background in the biblical texts, particularly Deuteronomy, and show how conceptions of the Shekhinah evolved in early Judaism.

Robert Sher-Machherndl is an award-winning contemporary ballet choreographer from Vienna, Austria. In addition to serving as a principal dancer in numerous international ballet companies, he is a founder of Lemon Sponge Cake Contemporary Ballet in Boulder, where he’s choreographed many new works and established a variety of educational programs. Sher-Machherndl’s originally choreographed piece for SHE, “Grasping Aspects of Shekhinah by Generating Movement Phrases,” aims to embody co-existing female and male energies as they relate to the curious mythology of Shekhinah. He believes these elements have a constant presence in his choreography, performance, and creative process.

The symposium will be accompanied by an exhibit exploring the concept of Shekhinah, which will be on display in Norlin Library and available for viewing the night of the event and throughout the academic year. It will feature materials from the Post-Holocaust American Judaism Collections that relate to the Shekhinah and show her transformation over the years.

SHE is part of the new Community Talks Series in the Program in Jewish Studies. This subscription series features nationally and internationally renowned scholars, authors, artists, and performers for themed public events with the goal of enriching community learning and expanding access to academic programming on Jewish culture and history. Guarantee your spot at all of our Community Talks events by becoming a subscription member. Subscribers will receive sneak previews, exclusive offers, and intimate dinners and salons with visiting speakers. To learn more and subscribe, please visit their website at colorado.edu/jewishstudies.

This event is supported by the Program in Jewish Studies, University Libraries’ Special Collections and Archives and made possible by support from Rose Community Foundation, a Research & Innovative Seed Grant, and university cosponsors.