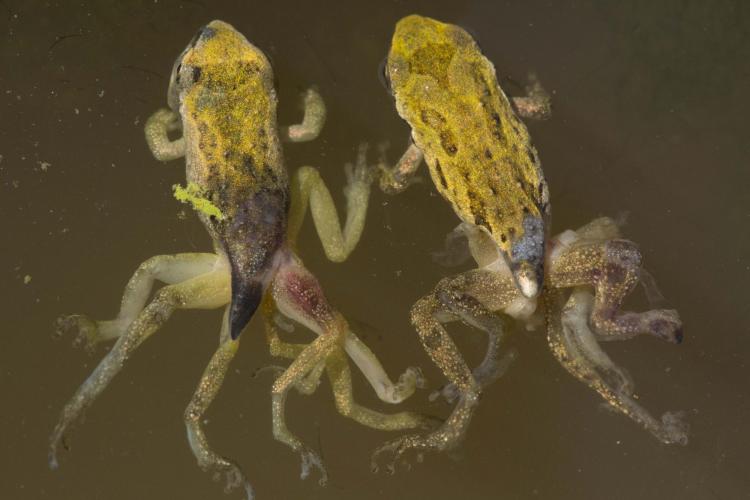 Understanding how many animals are killed by wildlife disease is a tremendously difficult question to address. In a new study, Mark Wilber and colleagues combine information on parasite distributions, extensive field data, and laboratory experiments to estimate – for the first time – how many amphibians die annually from trematode parasite infection.

World-wide, infectious diseases represent a major source of mortality in humans and livestock. For wildlife populations, disease-induced mortality is likely even greater, but remains notoriously difficult to estimate—especially for endemic infections. Approaches for quantifying wildlife mortality due to endemic infections have historically been limited by an inability to directly observe wildlife mortality in nature. Here we address a question that can rarely be answered for endemic pathogens of wildlife: what are the population- and landscape-level effects of infection on host mortality? We combined laboratory experiments, extensive field data and novel mathematical models to indirectly estimate the magnitude of mortality induced by an endemic, virulent trematode parasite (Ribeiroia ondatrae) on hundreds of amphibian populations spanning four native species. We developed a flexible statistical model that uses patterns of aggregation in parasite abundance to infer host mortality. Our model improves on previous approaches for inferring host mortality from parasite abundance data by (i) relaxing restrictive assumptions on the timing of host mortality and sampling, (ii) placing all mortality inference within a Bayesian framework to better quantify uncertainty and (iii) accommodating data from laboratory experiments and field sampling to allow for estimates and comparisons of mortality within and among host populations. Applying our approach to 301 amphibian populations, we found that trematode infection was associated with an average of between 13% and 40% populationlevel mortality. For three of the four amphibian species, our models predicted that some populations experienced >90% mortality due to infection, leading to mortality of thousands of amphibian larvae within a pond. At the landscape scale, the total number of amphibians predicted to succumb to infection was driven by a few high mortality sites, with fewer than 20% of sites contributing to greater than 80% of amphibian mortality on the landscape. The mortality estimates in this study provide a rare glimpse into the magnitude of effects that endemic parasites can have on wildlife populations and our theoretical framework for indirectly inferring parasite-induced mortality can be applied to other host–parasite systems to help reveal the hidden death toll of pathogens on wildlife hosts.