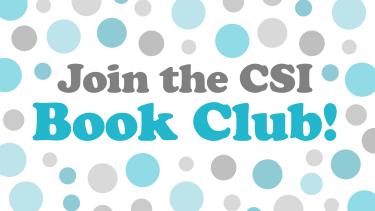 Thank you for your interest in the CSI Book Club! This semester we will be offering a variety of different book clubs for you to choose from! Leadership, diversity and inclusion, and New York Times Best Sellers. Please look carefully at the book descriptions and the dates in which the book club will meet virtually, before selecting which club you would like to sign up for.

2. Book club capacity will be limited, we want this to be an intimate space where you can meet others, have meaningful discussions, and grow.

3. You will be contacted if you have been admitted into the book club. It will be first come first serve. The signup form will automatically close once the book club has reached capacity.

4. Once you have been accepted into the book club, you will receive directions on how to receive your book.

Registration for the first round of book clubs will begin on at 10 a.m. MDT on August 28.

You will be notified of your book club participation status by September 4.

If you lead a student organization and you’re frustrated that you and a few others do all the work, you need to motivate a specific set of overlooked members.

It's the concept that will set student leaders free. Stop focusing on those who check out or cause problems, and start focusing on those “middle-third members” who hate drama, care for your organization and prefer to play a supporting role. Directing your efforts toward the middle – and understanding what they can contribute – may solve your most pressing leadership challenges.

In the last three decades of the twentieth century, LGBT Latinas/os faced several forms of discrimination. The greater Latino community did not often accept sexual minorities, and the mainstream LGBT movement expected everyone, regardless of their ethnic and racial background, to adhere to a specific set of priorities so as to accommodate a “unified” agenda. To disrupt the cycle of sexism, racism and homophobia that they experienced, LGBT Latinas/os organized themselves on local, state, and national levels, forming communities in which they could fight for equal rights while simultaneously staying true to both their ethnic and sexual identities. Yet histories of LGBT activism in the 1970s, 1980s and 1990s often reduce the role that Latinas/os played, resulting in misinformation, or ignore their work entirely, erasing them from history.

“Queer Brown Voices” is the first book published to counter this trend, documenting the efforts of some of these LGBT Latina/o activists. Comprising essays and oral history interviews that present the experiences of fourteen activists across the United States and in Puerto Rico, the book offers a new perspective on the history of LGBT mobilization and activism. The activists discuss subjects that shed light not only on the organizations they helped to create and operate, but also on their broad-ranging experiences of being racialized and discriminated against, fighting for access to health care during the HIV/AIDS epidemic, and struggling for awareness.

Talking to Strangers: What We Should Know About the People We Don’t Know
by Malcom Gladwell

THIS EVENT IS FULL.  PLEASE JOIN US FOR OTHER EVENTS.

How did Fidel Castro fool the CIA for a generation? Why did Neville Chamberlain think he could trust Adolf Hitler? Why are campus sexual assaults on the rise? Do television sitcoms teach us something about the way we relate to each other that isn’t true?

While tackling these questions, Malcolm Gladwell was not solely writing a book for the page. He was also producing for the ear. In the audiobook version of Talking to Strangers, you'll hear the voices of people he interviewed – scientists, criminologists, military psychologists. Court transcripts are brought to life with re-enactments. You actually hear the contentious arrest of Sandra Bland by the side of the road in Texas. As Gladwell revisits the deceptions of Bernie Madoff, the trial of Amanda Knox and the suicide of Sylvia Plath, you hear directly from many of the players in these real-life tragedies. There's even a theme song – Janelle Monae’s “Hell You Talmbout.”

Something is very wrong, Gladwell argues, with the tools and strategies we use to make sense of people we don’t know. And because we don’t know how to talk to strangers, we are inviting conflict and misunderstanding in ways that have a profound effect on our lives and our world.

Registration for the second round of book clubs will begin on Friday, October 9th at 10 a.m. MDT.

You will be notified of your book club participation status by October 16th.

Round 2:  Diversity and Inclusion: There, There Registration

Diversity and Inclusion: There There

There, There
by Tommy Orange

Tommy Orange's wondrous and shattering novel follows twelve characters from Native communities: all traveling to the Big Oakland Powwow, all connected to one another in ways they may not yet realize. Among them is Jacquie Red Feather, newly sober and trying to make it back to the family she left behind. Dene Oxendene, pulling his life together after his uncle's death and working at the powwow to honor his memory. Fourteen-year-old Orvil, coming to perform traditional dance for the very first time. Together, this chorus of voices tells of the plight of the urban Native American--grappling with a complex and painful history, with an inheritance of beauty and spirituality, with communion and sacrifice and heroism. Hailed as an instant classic, There There is at once poignant and unflinching, utterly contemporary and truly unforgettable.

Where the Crawdads Sing
by Delia Owens

For years, rumors of the “Marsh Girl” have haunted Barkley Cove, a quiet town on the North Carolina coast. So, in late 1969, when handsome Chase Andrews is found dead, the locals immediately suspect Kya Clark, the so-called Marsh Girl. But Kya is not what they say. Sensitive and intelligent, she has survived for years alone in the marsh that she calls home, finding friends in the gulls and lessons in the sand. Then the time comes when she yearns to be touched and loved. When two young men from town become intrigued by her wild beauty, Kya opens herself to a new life–until the unthinkable happens.

Perfect for fans of Barbara Kingsolver and Karen Russell, Where the Crawdads Sing is at once an exquisite ode to the natural world, a heartbreaking coming-of-age story, and a surprising tale of possible murder. Owens reminds us that we are forever shaped by the children we once were, and that we are all subject to the beautiful and violent secrets that nature keeps.