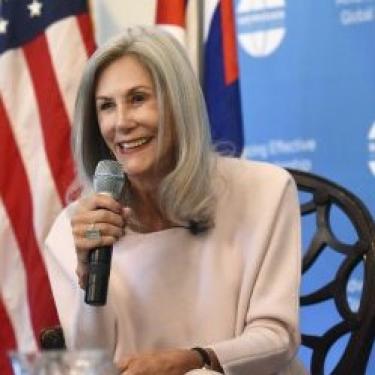 Vicki has served as both Deputy Assistant Secretary of Defense for Africa and Deputy Assistant Secretary of State for Africa, responsible for U.S. policy toward West and Francophone Africa. Vicki also led American diplomatic missions in Mali, Madagascar, Cuba, and Ethiopia and has been a Visiting Fellow at the Brookings Institution; a Fellow at the Institute of Politics at Harvard’s Kennedy School of Government; and a Congressional Fellow on the staff of former Senator Jeff Bingaman (D-NM). Following her studies at CU, Vicki was a Peace Corps Volunteer in Peru and holds a MS from Johns Hopkins School for Advance International Studies and an MA from CU. Her book, Our Woman in Havana: A Diplomat’s Chronicle of America’s Long Struggle with Castro’s Cuba,” explains the dynamics of the US – Cuba relationship from her vantage point as a former head of the US diplomatic mission in Cuba.