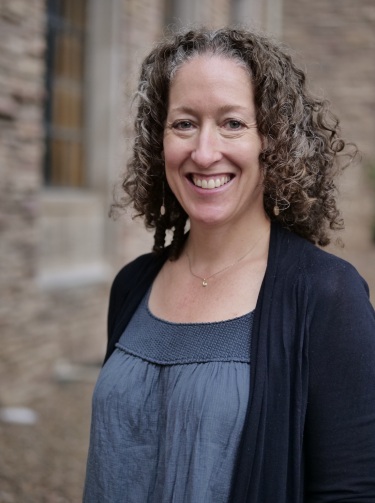 The awards, which carry a $1,000 research grant and are given annually, recognize outstanding achievement in research, teaching and service that enhances the public good. A faculty committee selected the winners.

Comerford, who focuses on galaxy evolution and active galactic nuclei (or AGN), was cited for her set of four papers titled “The Origin of Double-Peaked Narrow Lines in Active Galactic Nuclei: I – IV.” Published from 2015 to 2018 in Astrophysical Journal and Monthly Notices of the Royal Astronomical Society, they describe a breakthrough in the methods used to identify galaxies that contain “dual” black holes.

Emerson, who is also an associate professor in the Intermedia Arts, Writing and Performance Program, was cited for her book, Reading Writing Interfaces: From the Digital to the Bookbound, which has been highly cited, received numerous positive reviews and has been taught at institutions across the country.

“Your scholarly work is helping shape the field of media studies, as well as defining new research and teaching paradigms for digital humanities scholarship,” the provost wrote for Emerson.

Ortman, who focuses on indigenous partnerships and collaborative synthesis in archaeology, was cited for his work related to the Social Reactors Project, a transdisciplinary collaboration that has investigated the fundamental social processes behind agglomeration effects. Faculty colleagues describe the project as making “groundbreaking contributions to the field of archaeology.” Ortman has also worked with outside partners to establish the Center for Collaborative Synthesis in Archaeology, which he directs, within the Institute of Behavioral Science.

Sachs, who specializes in the history of early America and focuses on slavery, gender and law, was cited for her book Home Rule: Households, Manhood and National Expansion on the Eighteenth-Century Kentucky Frontier. Describing the book as well-crafted, the committee noted that its purpose was to understand how struggles for authority in ordinary households contributed to the larger processes of reconstituting national sovereignty and American identity.]