Science Under the Dome

Join us for our Science Under the Dome monthly live talk series. Talks in this series are presented by graduate student and postdoc researchers at CU Boulder.

(Normally, these events are a part of our regular talks and normal ticket prices apply. Groupons can be used. CU Boulder students are admitted FREE with valid BuffOne card. Tickets must be picked up in person and only one ticket per student.)

Climate Change in Our Backyard series

Our climate is changing and we must adapt to a world that is transforming right before our eyes. Early warning signs of climate change were seen in far away places like the Arctic, Antarctica, and Greenland. Now these impacts are affecting us here at home and changing the way we live our lives. Join us as we explore the local and global impacts of climate change and ways in which we can contribute to a solution. 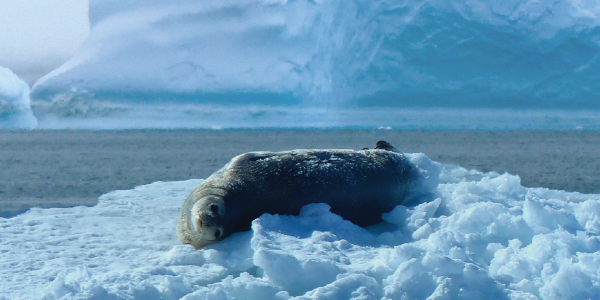 Not So Far Removed: Changes at the Poles & Implications for Colorado - April 21 at 7pm

Thousands of miles away, icy frontiers exist in what seem to be a world completely removed from our own. Polar bears roam for miles across floating ice platforms to hunt seals. Penguins clumsily waddle and gracefully dive to escape the jaws of killer whales and leopard seals. Ice coats the surface of the ocean for hundreds of miles and continent-sized land ice towers as high as a sky scraper. Here, some of the harshest conditions on the planet comprise the normal day-to-day. These regions are experiencing changes that are occurring faster than expected, but with the change occurring so far away, could it possibly impact us here in Colorado and the continental US?

Join Dr. Tasha Snow on her adventures to conduct research in the far reaches of our planet, taking ice cores from the middle of Greenland in the north, to navigating treacherous iceberg riddled oceans to map the warm waters reaching Antarctic glaciers in the south. She will take you through research projects being conducted by Colorado researchers, the changes that are being witnessed by our scientists, and how these changes impact us in Colorado. 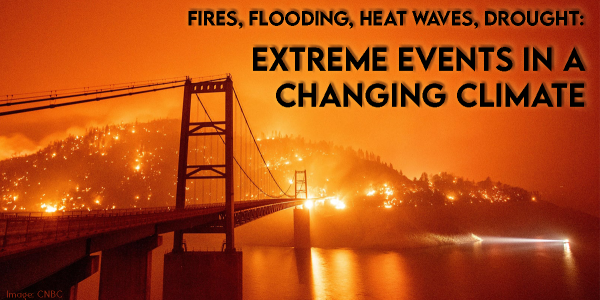 Join us to explore the link between extreme weather and climate change. Wildfires in the west have broken records and affected air quality across much of the country. There have been so many storms that the National Hurricane Center has run out of names for the 2020 Atlantic hurricane season. Has climate change actually contributed to these events? Are they becoming more frequent? Heat waves, droughts, floods, and even cold snaps. We'll talk about the mechanisms through which these events can be influenced by climate change and what we can expect to see in the future.

Erika Schreiber received her bachelor's degree in Science of Earth Systems from Cornell University in 2012, her Master's in Geography from the University of Delaware in 2015, and recently defended her Ph.D. in Geography at CU Boulder. Her Ph.D. research focused on how storms in the Arctic impact sea ice, and how climate change is affecting that relationship. She is now working at UNAVCO as a Polar Engineer, facilitating studies of Antarctic glaciers.

Science and technology don’t exist in a vacuum - there are countless ways that research and innovation play a significant role in society at large. What are some of the ways in which they overlap? This series explores the intersection of science and society, addressing topics such as light pollution, GMOs, and mining asteroids, and the talks invite the audience to consider ways in which they have been impacted by this intersection. 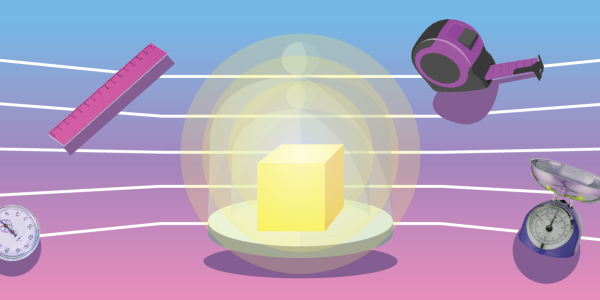 Do It For The Gram...The Kilogram - March 17 - TALK POSTPONED

If you sat down and thought about it, what is a kilogram? As a matter of fact, what is any unit of measurement? What’s a meter, an inch? What’s a second? We use these measurements every day, and to most of us they just are unchanging, well-defined units of measurements. But what if they aren’t as unambiguous as we believe them to be? The international system of units, or the metric system, was developed in the early 20th century but got its start with the much older MKS or meter kilogram-second system developed in France, which was widely adopted in the world by 1875 with the Treaty of Metre. At the metre convention, the reference standard for all the kilograms and meters in the world was made. You see, before May 20, 2019 all kilograms in the world were based off of an actual physical object. And that was a problem, so scientists decided to fix the issue by redefining what a kilogram is.

Marium Fernanders is a PhD candidate in the Chemistry department at CU Boulder. A refrain often heard in the search for life on other planets is to search for water. Marium does laboratory studies simulating the Martian environment to study the interaction of water vapor on surfaces, in the hopes of determining if liquid water can form on the surface or sub-surface of Mars. 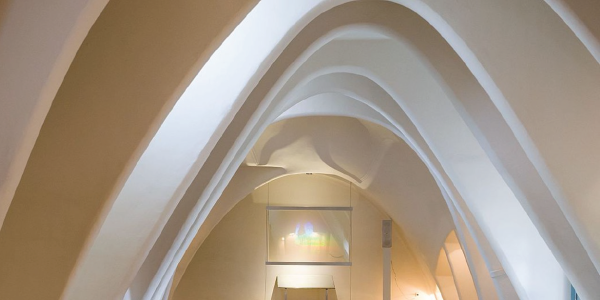 Arches: The Ancient Bones of Modern Architecture - February 17 at 7pm

The arch is a simple piece of technology that revolutionized civilization in Spain. Arches are used in aqueducts, bridges, castles, cathedrals, mosques and synagogues, and form many ancient and modern buildings of Spain (and much of Europe). Different cultures, ideas and time periods influenced the arch throughout Spanish history, improving its aesthetic and structural qualities. But no influence on the arch was more revolutionary than that proposed and implemented by the architect Antoni Gaudí. By designing arches upside down, he used naturally shaped “catenary” arches in his designs, which are not only stronger, but arguably more beautiful. He demonstrated that even the most resolute and reliable technologies can be improved with a simple change of perspective. What are stagnant ideas in our society, culture, or sciences that could use a new point of view?

Corey Trujillo is a Ph.D. candidate in the Department of Mechanical Engineering and studies methods of cleaning petroleum-contaminated soil using concentrated solar power. Born and raised in rural Nevada, Trujillo grew up with a strong appreciation for the beauty of nature which deepened during a semester he spent exploring art and architecture in Spain. He strives to build bridges between technical and creative fields and enjoys gardening, cooking and building in his spare time. 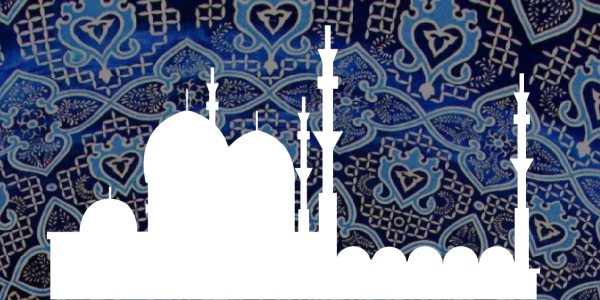 What do the floor of the Oxford mathematics department and Medieval Islamic architecture have in common? They both feature a particular kind of mathematical pattern called aperiodic tilings. In the 1960s and 1970s, mathematicians found different sets of shapes that could be put on a flat surface in such a way that the pattern never exactly repeats, so matter how many tiles you use. Roger Penrose created one of the most famous of these tilings, involving just two different shapes: a kite and a dart. Though Penrose is credited for this discovery, a version of this very same mathematical tiling appears in Medieval Islamic architecture dating to the 1400s. Additionally, in the same way that a set of cubes is the three-dimensional version of a tiling of squares, these aperiodic tilings provide the basis for the atomic structure of newly discovered set of materials called quasi-crystals. In this talk, we explore how this one mathematical idea appears in surprising and beautiful places.

Catherine Blume is currently pursuing her Ph.D. in astrophysics at the University of Colorado Boulder. She earned her B.A. in physics from Princeton University in 2018, where she studied Earth's magnetosphere. At CU, she studies the solar interior using fluid simulations. When she is not buried beneath equations, she enjoys crocheting cat sweaters, being outside with friends, and baking banana cupcakes with (what some would say is too much) chocolate frosting.

From warp drives to artificial intelligence to living on Mars, this series is to explore a variety of scientific ideas that surface in science fiction books, movies, and video games. Where have popular sci-fi movies portrayed science correctly, and where has Hollywood gone off the deep end? What technologies were once ‘sci-fi’ but are now rapidly becoming a reality? 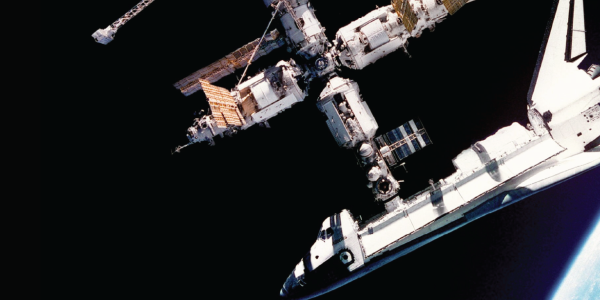 Where Only a Few Have Gone Before: How Humans Live and Work in Space - November 11 at 7pm

Have you ever wondered what it’s like to live in space, or how your favorite science fiction movie compares to the real thing? Join us for a journey through film and history as we discuss the way artists and filmmakers have inspired real-life engineers and influenced the way our astronauts live and work in space. We’ll discuss the early days of science fiction, the original Star Trek, 2001: A Space Odyssey, and more recent films such as the Martian. We’ll also be learning what it takes to keep humans alive and well in orbit around Earth, and how we can study the effects of spaceflight in places here on the ground.

Annika Rollock is a PhD student in Bioastronautics at the University of Colorado, Boulder. Originally from New Jersey, Annika completed her BS in aeronautical and astronautical engineering from MIT in 2018, where she also rowed competitively at the Division I level and minored in creative writing. Her PhD research is on the design of future deep space habitats, through which she works with NASA on the HOME (Habitats Optimized for Missions of Exploration) project. She loves all thing science fiction and fantasy, and in her free time she loves to read, write, and get outdoors.