The International Planetary Probe Workshop (IPPW) Short Course took place the weekend before the IPPW conference, 9-10 June 2018, and offered a detailed examination of the topic of Small Satellites for interplanetary exploration.

Over the past decade, the emerging Small Satellite (SmallSat) paradigm has been transforming the space industry.  While small spacecraft have been developed for many years, the arrival of the CubeSat form factor and subsequent international efforts have dramatically accelerated the proliferation of small, low-cost, and risk-tolerant space missions.  Where the “traditional” model centers on exceptionally high-reliability and low-risk spacecraft development, the Small Satellite mentality encourages a willingness to take more calculated risks in order to accelerate technology development and explore new corners of our solar system.

Early efforts in the SmallSat area concentrated in low-Earth orbit, as access to space opened up for organizations and universities who were previously unable to afford to participate.  As the scope and capability of Small Satellite hardware has progressed, even national space agencies are beginning to explore the potential of this platform for bold and ambitious exploration of deep space.  The scientific possibilities for planetary SmallSats, particularly in network or constellation configurations or as sacrificial elements that brave the harsh environments of challenging destinations, are especially compelling and worthy of pursuit.

There are important technical challenges facing the community of SmallSat developers as they engage in deep space planetary science and exploration.  For example, many scientific payloads and common spacecraft components are simply less productive when less surface area or volume is available to them.   Another obstacle is access to space: the demands and costs of launch, navigation, and orbit insertion do not inherently scale down with size.  Other key concerns are radiation tolerance and data return capability.

Despite these challenges, the rapid pace at which new hardware is being developed, space-qualified, and improved suggests that the full capability of the SmallSat platform has yet to be realized.  As technologies advance, mission architects are just beginning to unveil the multitude of ways in which small, focused spacecraft can contribute to our understanding of the solar system.

This short course will examine the brief history and trends associated with Small Satellites, and will explore their growing potential for planetary probe exploration.  Special consideration will be given to SmallSat developments that are relevant to planetary entry, descent, and landing and in situ planetary science.

Day 1 will summarize the state-of-the-art for Small Spacecraft, provide an overview of SmallSat subsystem capabilities and constraints, and examine the international efforts that are ongoing in this area in both commercial and governmental applications.

Day 2 will look forward, toward planetary missions and technologies that are emerging around the world to enable bold planetary science and exploration.

Past and Present Small Probe Missions 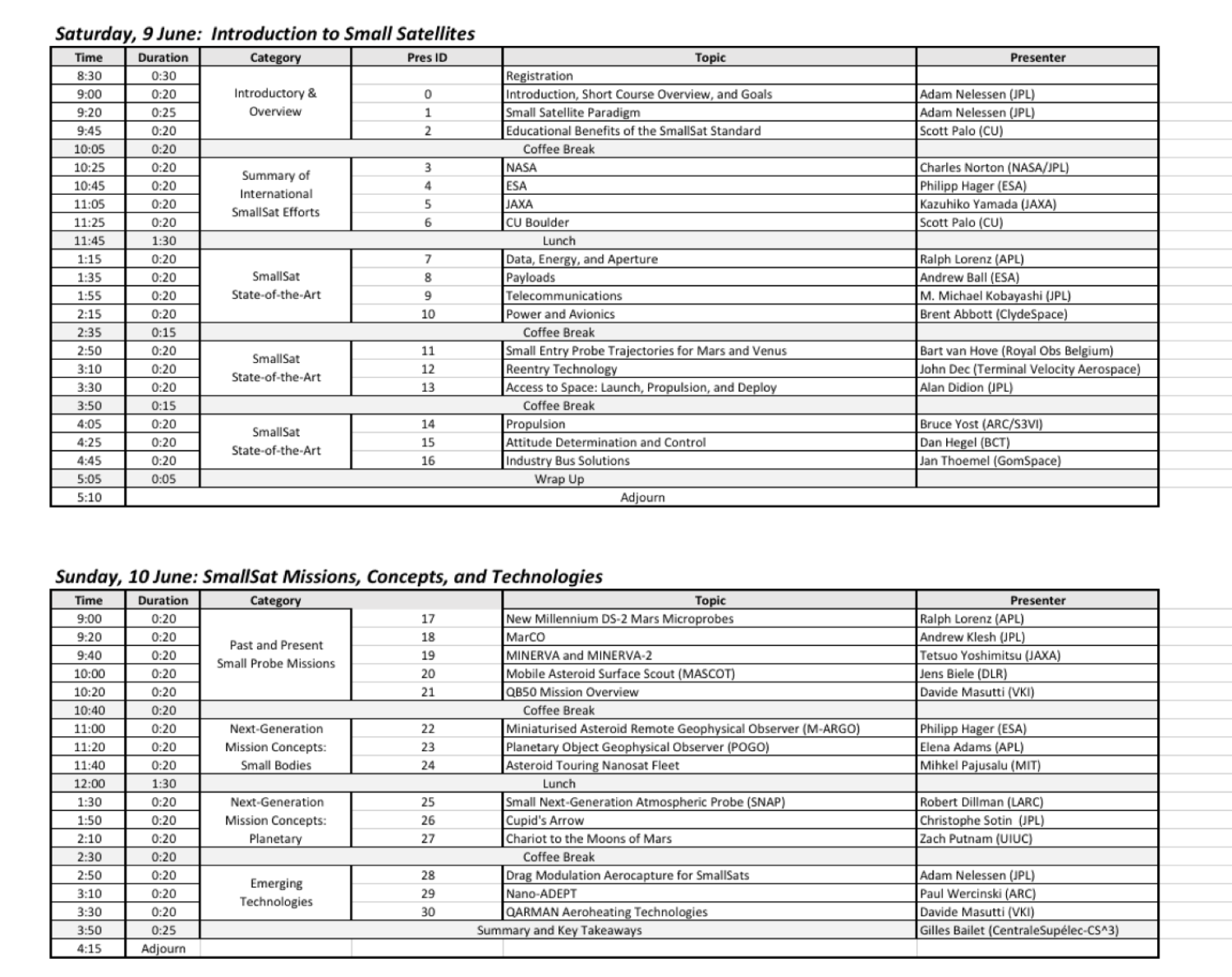