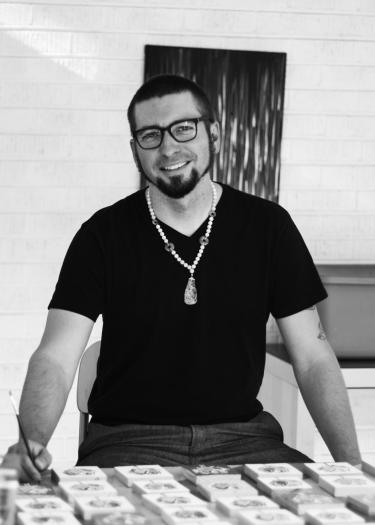 Jesse Van Horne is a multi-faceted designer with experience in many different design capacities. He holds a Master’s Degree in Landscape Architecture (UCD 2009) and worked for the National Park Service as Landscape Architect/Project Specialist for 4 years, doing projects in parks all over the United States, from Death Valley to Shenandoah and many places in-between.

“My time with NPS gave me the confidence to work on all scales of projects, from the micro to the super-huge.”

In 2012 Jesse was awarded his first contract for a public art installation, and after taking a month off to fabricate, feeling so invigorated, he decided not to return to his role as a public servant, desiring instead to continue to pursue his own more creative design interests. He founded Skullflower Design Studios in 2012 where he executed a broad range of designs for clients from many different backgrounds. Custom furniture, custom lighting, custom signage, website and graphic design were some of his mainstays as he continued to pursue contracts for public art installations. He simultaneously developed his career as a visual artist and began showing his work frequently around Denver and Boulder, with notable residencies in Denver’s historic Santa Fe Arts District at Hangar 41, SYNC Gallery, and The Molecule Effect.

Recently Jesse completed commissions for public art installations at a large tech company in both Denver and Redwood City, California. Additionally, in 2015 he founded Zen and the Art of Landscape, a small design/build company where he finessed xeric and climatologically appropriate landscape design for a broad variety of mostly residential clientele. Plants, gardening, and nature continue to exude a heavy influence on his design philosophy, and if you have Jesse as a professor, chances are good you’ll receive one of his beloved spider plants, which he liberally propagates and distributes to anyone wanting to develop their green thumb. If you know who Frederick Law Olmstead is, make sure to ask for one of the saplings from the Olmstead lineage!