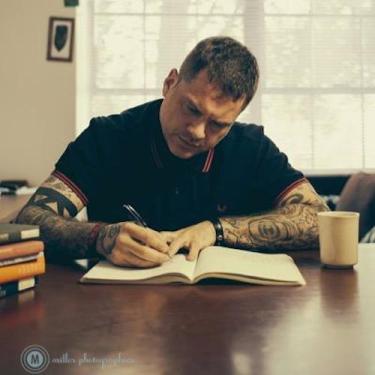 Noah Eli Gordon's works include The Word Kingdom in the Word Kingdom (Brooklyn Arts Press, 2015), The Year of the Rooster (Ahsahta Press, 2013), The Source (Futurepoem, 2011), Novel Pictorial Noise (Harper Perennial, 2007), which was selected by John Ashbery for the National Poetry Series and subsequently chosen for the San Francisco State Poetry Center Book Award, Figures for a Darkroom Voice (Tarpaulin Sky Press, 2007), A Fiddle Pulled from the Throat of a Sparrow (New Issues Press, 2007), inbox (BlazeVOX, 2006), The Area of Sound Called the Subtone (Ahsahta Press, 2004), and The Frequencies (Tougher Disguises, 2003).

Gordon is the co-publisher of Letter Machine Editions, an editor with The Volta, and an Assistant Professor in the MFA program in Creative Writing at The University of Colorado Boulder, where he currently directs Subito Press. His essays, reviews, creative nonfiction, criticism, and poetry appear widely, including journals such as Bookforum, Seneca Review, Boston Review, Fence, Hambone, and in the anthologies Postmodern American Poetry: A Norton Anthology, A Broken Thing: Poets on the Line, Against Expression: An Anthology of Conceptual Writing, Poets on Teaching, and Burning Interiors: David Shapiro’s Poetry and Poetics.