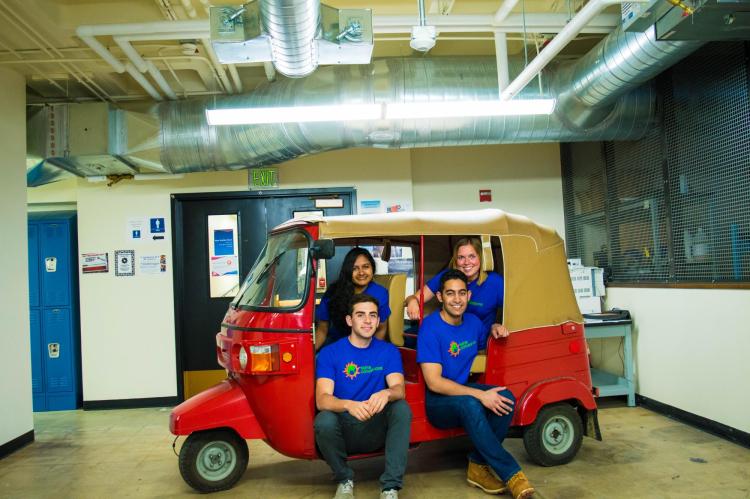 In 2014, Maithreyi Gopalakrishnan traveled to India, a place she visited frequently to see family. But this time, she had a different mission: developing her business venture.

On this three-week, grant-funded trip, Gopalakrishnan refined her designs for a hybrid rickshaw conversion kit, aiming to reduce pollution caused by the passenger vehicles popular in developing countries. She dissected an auto rickshaw, took pictures, interviewed drivers and learned about their lives and needs.

As a student at CU, Gopalakrishnan had become involved with the Center for Environmental Energy Security, an interdisciplinary research and policy center that aims to move society toward a sustainable energy future. In 2012, she coordinated a conference on the subject, recruiting speakers involved with sustainable cook stoves, water and transportation projects in developing countries.

She embarked on her own research project to pilot a cleaner rickshaw and launched a company, Surya Conversions, to attract investors and manufacture hybrid electric conversion kits. Her team developed a prototype and began rigorous testing this fall. The kit, which retrofits common auto rickshaw models without modifying the vehicle’s existing components, can be installed in about an hour and reduces vehicle emissions by as much as a third. Drivers can see fuel savings of up to $600 per year.

“It took me very little time to find people who were interested in this project,” Gopalakrishnan said.

Her team won the Social Impact Prize as part of CU’s New Venture Challenge in 2014, then won the top prize in the Boulder Chamber of Commerce’s Espirit Venture Challenge in 2015. At graduation in spring 2016, the College of Engineering and Applied Science recognized Gopalakrishnan as one of two Outstanding Graduates for Service.

Now, the project that Gopalakrishnan started as an undergraduate has become a career, as the young alum works to help Surya Conversions take off.