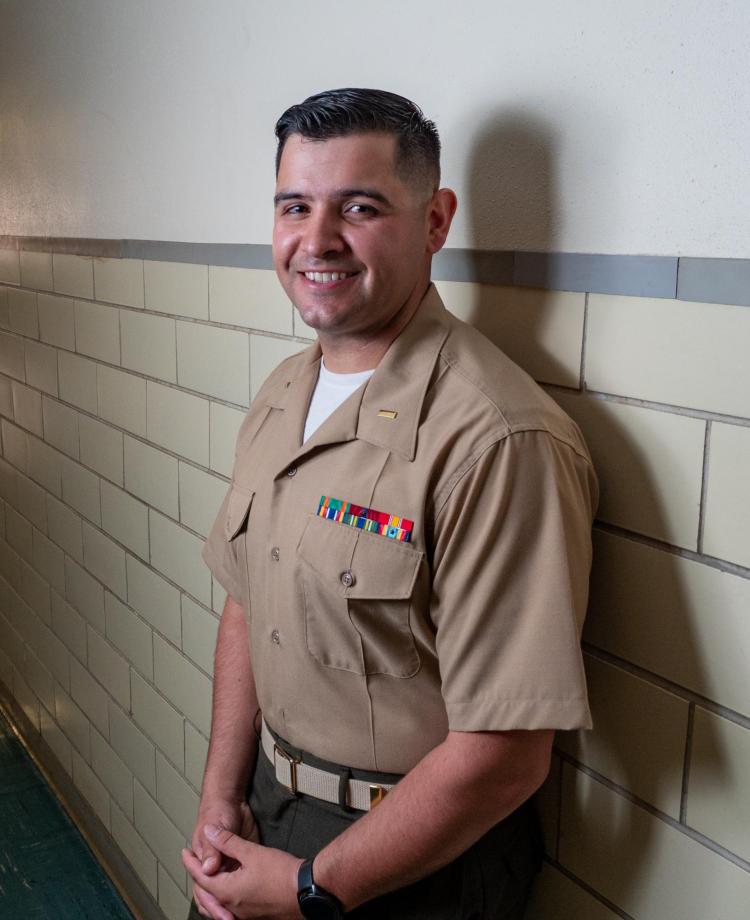 The perspectives and experiences that Travis Dominguez brought to his leadership capstone class reflect the work ethic instilled in him by his family. Both of his grandfathers own businesses, one a barber shop and the other an auto shop. His father is an electrician at a nuclear power plant, while his mom works as an accounting manager for an engineering software company and also owns a yoga studio.

“They’re blue-collar, hard-working people,” said Dominguez, now a second lieutenant in the Marines. “I wanted to say I was the first person in my family to get a college degree, but my mom went back to school and got her bachelor’s degree and beat me by less than a month.”

Dominguez grew up in the agricultural area of California’s Central Coast. Starting at 13, he helped on his stepfather’s ranch, and at 15 began working part-time jobs at restaurants, a moving company and sporting goods store.

I felt like those experiences helped create who I am,” he said.

After graduating from high school, he came to CU Boulder but had to leave in 2009 to earn an income. In 2010, Dominguez enlisted in the Marine Corps, serving in the signal intelligence field. He applied for a specialized education program that allowed him to stay on active duty and attend college full time. He returned to CU to finish his undergraduate degree and is still with the Naval ROTC.

The final class to get his minor in leadership studies was the LEAD 4000 course. Housed in the School of Education, the minor is available to and engages with CU Boulder students in all majors and colleges. Among the requirements for the leadership capstone class, students engage in critical conversations and use decisive thinking to show knowledge and leadership skills, and design a capstone leadership project with peers across a multitude of backgrounds.

Returning to college at age 25 was much different from his experience at 18. Sharing his knowledge and views on life gave the other students a new perspective. Not one to jump into a class discussion, Dominguez preferred to listen first and then share his views. He didn’t want the other students, who were 18 to 24, to feel that his opinions were more valid than theirs because he had more life experience.

“I never felt like the ‘old man’ in the leadership class, but I was definitely older,” he said. “Sometimes my point of view comes from actual experience, but I definitely didn’t want to appear to put down other opinions. Our perspectives and life issues were different, but overall the class was cohesive. It was interesting to be in a more eclectic environment.” In December 2018, Dominguez graduated with an economics major and a minor in leadership studies. In August he will attend specialized Marine Corps training in Virginia and will learn what his next military occupational specialty will be.

“I definitely think there are opportunities in the world for everyone,” he said. “There are many ways to better yourself. If you want to be a leader and be successful, the leadership minor teaches that it is self-driven. Success is in your hands regardless of where you start from.” 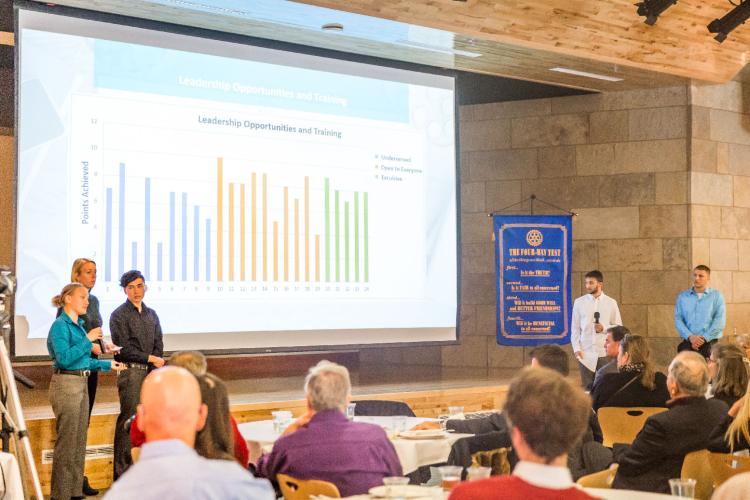 The world needs effective, ethical leaders. Housed in the School of Education and part of CU Engage, the leadership studies minor prepares leaders through rigorous coursework, self-reflection and team projects addressing local leadership challenges. The program continues to grow and support inclusive experiences for students from a variety of backgrounds.

Students reported more positive experiences of inclusion in their leadership studies courses as compared with other courses and campus experiences, testifying their courses were more:

Students often participate in CU Boulder leadership pathways, such as