Use of GAC in the Distribution System
to Meet DBP Regulations for Small Systems
Chris Corwin, CU

Remote GAC adsorption would take place in an above ground pressure vessel, similar to the systems applied for contaminant adsorption at many polluted groundwater sources, pictured in Figure 4.5. Although the influent water to the treatment system will be chlorinated, the residual disinfectant will be quenched within the first few inches of GAC. A downstream chlorination system will be required, but this may be used to reduce the chlorine dose provided at the plant which further reduces DBP formation throughout the distribution system; as expected there is often an association between long residence times, low chorine and high TTHMs. The system is isolated by check valves that allow treatment in only one direction, in a flow reversal event, a separate set of check valves would open a bypass line to ensure maximum reliability of the distribution system. A backwash line working off of system pressure is also needed. A schematic of the treatment system is shown in Figure 4.6. 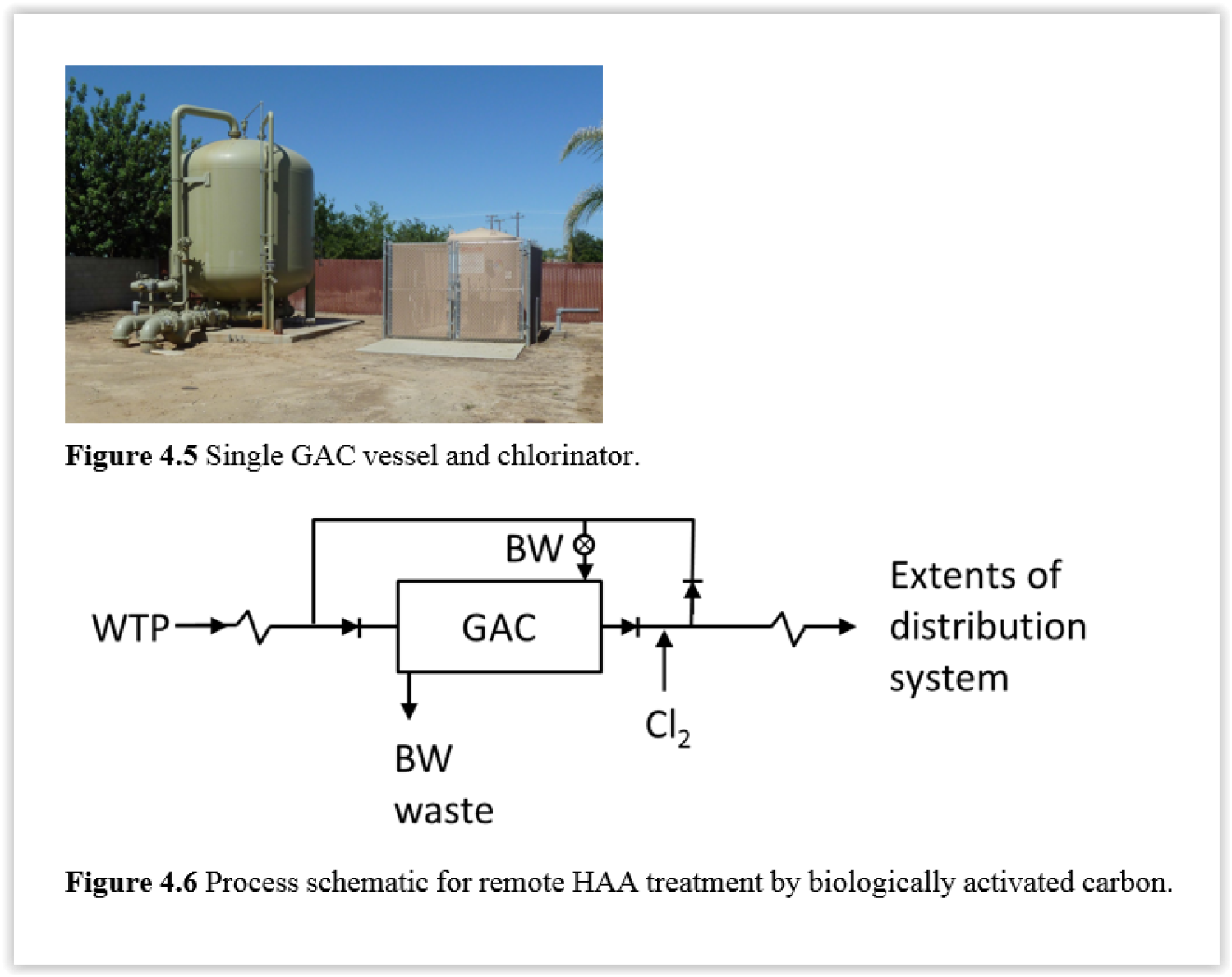 Remote GAC adsorption of DBPs. The performance limits for GAC to reduce DBP concentrations will be defined. The bed life for each DBP species will be measured with variable influent DBP concentrations and TOC concentrations. Bench-scale adsorption tests  will be performed using the rapid small-scale column test. Rechlorination of RSSCT effluent and simulated distribution system (SDS) tests will be performed to determine the impact on downstream DBP formation. Confirmatory pilot testing will be performed in at the UC-B pilot plant. Analysis will consist of routine TTHM, HAA9, and select nitrogenous DBP samples as well as periodic measurements of TOX to quantify the overall health risk reduction compared to the influent water. The variables to be tested are presented in Table 4.2 below.

Allowing a chlorine residual to come into contact with GAC media has several potential drawbacks including; potential loss of adsorption capacity (Gillogly et al, 1998) and the formation of chlorinated organics (Summers et al, 2010). There are also potential problems with reactivation of GAC that has been exposed to chlorine, but for small, remote systems it would likely be economical to dispose of the exhausted GAC rather than reactivate. A set of batch tests using GAC with pre-adsorbed TOC will be exposed to a high level of chlorine to determine the formation potential of unidentified halogenated organics. TTHM, HAA9, select nitrogenous DBPs, and TOX will be analyzed. If TOX results suggest high levels of other DBPs formed, accurate mass time-of-flight measurements will be made in attempt to identify the unknown DBPs.

Remote biological GAC for the control of HAAs. In biological mode using the GAC to quench the residual disinfectant will allow the establishment of a biological community. HAA biodegradation has been reported in distribution systems as early as Chen and Weisel (1998) which have much less favorable conditions than in the engineered biological GAC treatment system. The percentage reduction of HAAs in biological mode will be defined over a defined performance envelope for temperature, empty bed contact time (EBCT), and DBP formation conditions (TOC, bromide, water age). Biological bench-scale tests will be performed using full-size GAC media in a 1-inch column. After the acclimation period, analysis will consist of weekly TTHM, HAA9 samples as well as periodic measurements of TOX and nitrosamines to quantify the overall health risk reduction compared to the influent water. Confirmatory pilot testing will also be performed for biological GAC treatment of HAAs.

One operational aspect of biological GAC is the performance before biological acclimation has established. It is expected that the adsorption capacity of fresh GAC will offset the acclimation phase, but this will be studied in detail in the startup of the bench- and pilot-scale tests. Another issue to be investigated is the need to backwash the columns to prevent sloughing of biomass during normal operation.