Required materials will include the horizontal diffused aeration pilot-scale apparatus, a THM stock solution, and a salt tracer stock solution. Air compressors, air diffusers, flow meters, and pressure gauges will be needed to effectively run the reactor. The layout of the horizontal apparatus can be seen in Figure 4.3. The pilot unit will be 6-inch (15 cm) in diameter and roughly 15 ft (4.5m) in length. Air will be pumped into the system, and the water will be mixed using Westfall Manufacturing inline mixers as shown in Figure 4.4. Air will be then be injected into the system at 1, 2, or 3 injection sites. Each inline mixer is designed to mix the injected air bubbles thoroughly into the water for a distance equivalent to 10x the pipe diameter.

This research will use similar methods as used in the vertical aeration study performed by Cecchetti et al (2013). It will include the performance of a two part study including (1) a salt tracer study in order to determine the mean residence time (MRT) of the system at various operational and hydraulic conditions and (2) the use of a starting solution with a known concentration of THM species, and passing the solution through the system using various air to water (A/W) ratios, operational pressures, MRTs, and other variables to ascertain THM removals. These two studies will be used to determine the time to equilibrium and also the possible THM removals under the influence of different research variables, which will be discussed below.

Several research variables will be explored to see how THM removals are affected when these variables are changed and compared. These variables include time to equilibrium, a comparison of the vertical and horizontal reactors, the use of multiple injections, the use of different types of injection nozzles, altering pressure, altering A/W ratio, and altering temperature. Table 4.1 lists the different variables and their respective variations.

The time to equilibrium is important because that is where maximum removals of THMs will occur and the use of Henry’s law to predict THM removals will be relevant (Cecchetti et al 2013). In order to determine the time to equilibrium, a salt tracer study will be used. The salt tracer study will help determine the hydraulics of the system including the MRT, HRT (hydraulic residence time), Peclet number, and dispersion number. Using the method developed by Zwerneman (2012), Henry’s law constants and predicted % removals will be determined for the different experimental runs. These will be compared to actual %  removals and will allow it to be determined if equilibrium is reached within the MRTs of the different runs. Flow rates of 1, 2, 3, and 4 or higher gallons per minute (gpm) will be used. 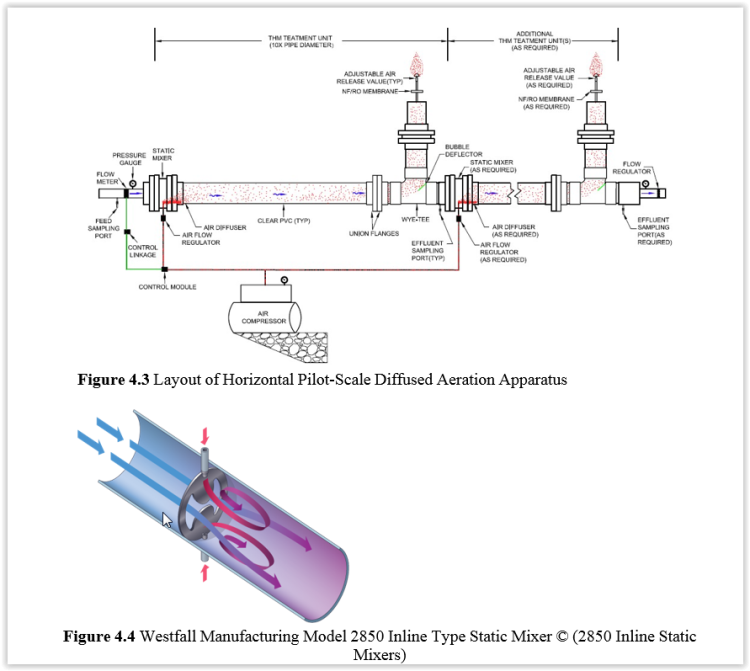 Comparison of Horizontal and Vertical Reactor. Data obtained from the horizontal reactor will be compared to data obtained from the vertical reactor. To do this, runs will need to keep certain variables constant, such as a 10:1 A/W ratio, a temperature of 20 °C, and a constant pressure at 40 psi. A run could be done with no inline mixer to determine how removal efficiencies compare while just considering the horizontal vs. vertical variable. The inline mixer/s could then be added to determine if this enhances removals. The mixer will increase mixing that could lower removals (Zwerneman 2012), but will likely be needed so that air does not travel to the top of the pipe. Westfall MFG 2850 Inline Static Mixers © were selected for this project due to their ability of providing adequate mixing while being easy to install and having no moving parts or maintenance required (2850 Inline Static Mixers). This will aid in the goal of this project to provide an easy to implement method to remove THMs from public water supplies.

Injector Type and Multiple Injections. The type of injector used to inject air into the reactor can influence the amount of air that can be pumped, the radius over which the air is pumped, and the air bubble size. These factors can all affect THM stripping. In this study, two different types of injectors will be explored; a stone diffuser and a BETE® diffuser. Multiple air injections will likely be needed to obtain adequate removals of THMs. Up to 3 air-injection sites will be used in this study to determine if they are required to reach equilibrium or enhance the removal of THMs. Air will be added in two different ways; (1) by splitting up the same amount of air over multiple injections, and (2) adding more air with successive injections.

Pressure and A/W Ratio. In order to compare to the vertical reactor, the horizontal reactor will be run at a pressure of 40 psi with an A/W ratio of 10:1. However, runs at higher pressures may be applicable since water distribution systems may run at pressures higher than 40 psi (up to 70 psi), and an increase in pressure will decrease THM removal (Zwerneman 2012). It will be necessary to determine that adequate removals will be possible for systems that operate at higher pressures. If adequate removals are not being met at certain pressures, the A/W ratio may need to be increased. Possible A/W ratios include 0, 10:1, 20:1, and 30:1. A control will also  be run without added pressure or air.