The first phase of the study is to explore more novel roughing filter configurations that could both enhance performance and simplify filter cleaning and maintenance requirements. Two configurations that are considered more novel will be evaluated side-by-side in pilot and selected field scale comparisons are shown in Figure 3-2. The upflow roughing filter in series represents a considerably smaller footprint than if the various sized-gravel are segregated by layers without necessarily a reduction in performance or hydraulic flushing of the interface. The surface-loaded horizontal roughing filter offers the ability to build up a schmutzdecke layer (where removals are noted to be an order of magnitude higher than in the bed depth (Page, 1997; Schijven et al., 2002; Unger and Collins, 2008)) and ready access to the filter clogging material either for direct removal by scraping or by drying and then raking to renew the interface. 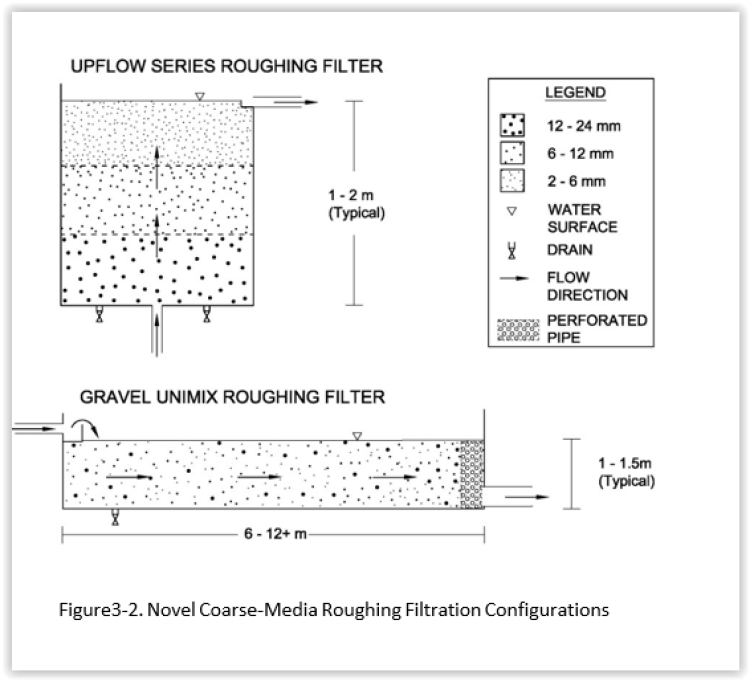 The second phase involves developing initial enhancement approaches to be explored at the bench-scale level and then take the more promising methods to at least the pilot level in the field. These initial enhancements include (but are not limited to) increasing the biomass by seeding with indigenous source water bacteria and by utilizing extractions from naturally occurring polymeric material to coat the coarse-media to favor attachment.

The first phase will involve the construction of 2-3 upflow vertical filters and 2-3 surface-loaded horizontal filters with each being at least 30-45 cm in diameter or cross-sectional dimensions and 1-2 meters in height or length. The gravel sizes will vary from the largest at 8-12 mm to the smallest at 1-2 mm. The medium gravel size will target 4-6 mm. The media in the horizontal filter will consist of a mixture of the three gravel sizes noted above. The principal roughing filter design variables to be assessed include surface area per unit volume (takes into account media size and uniformity coefficient), length-to-media diameter ratio (L/d), and empty-bed-contact- time (EBCT). Each filter will have multiple sampling ports located at the change of media size and at enough filter depth/length locations to model removals (3-5 sampling ports are planned). The filter sampling ports may be run continuously to facilitate the collection of representative samples with depth/length (i.e. EBCTs) but the total flows from the sampling ports will not exceed 5% of the flows through the roughing filters.

The seeding inoculates will be developed along the lines of what is typically used in the standard protocol for the BOD tests. In this case, a solution containing appropriate nutrients and minerals is prepared and then scrapings of a source water biofilm (found on stream sediments and stream rocks) are added to the enriched solution and allowed to incubate at temperatures considered ideal for the season. After a yet to be determined incubation period, the bacterial seeding is added to the roughing filters in a way that efficiently disperses the inoculant. Biofiltration removals are known to be problematic during colder temperatures, but this enhancement method could be used to favor the growth of cold water bacteria in roughing filters that otherwise may have limited bioactivity and lower treatment performance. The performance of the inoculated roughing filters will be compared with control roughing filters of the same configuration, design and operation. The number of inoculations planned for the 4-8 month pilot study will vary but at least 2-3 is planned.

Another roughing filtration enhancement to be explored is the ability of extracellular polymeric material to coat the media surface to produce more favorable sites for clay and microbe capture. As noted in a previous study, better treatment performance was achieved with Scenedesmus algae-ripened gravel media than with clean media (Collins et al., 1994). At full-scale, however, utilizing extracellular polymeric substances from single cell culture is unlikely nor feasible. Therefore, in this research we propose that polymeric substances from native or engineered sources of elevated microbial populations (e.g. algal blooms or biological wastewater treatment) could be harvested locally and utilized to enhance roughing filter operation.

Organic colloids are particles, operationally defined as organic particles between 3,500 Da and 0.45 µm isolated by dialysis (Dotson & Westerhoff, 2012) consisting primarily of cellular debris, have been shown to make up a significant portion (15 – 37%) of the total dissolved organic carbon pool in wastewater effluents and surface waters with active algal blooms. While unpublished, a portion of this material has been known by researchers to irreversibly foul XAD-8 resin used for dissolved organic matter isolation. Using a series of 0.45 µm and 3,000 Da ceramic membranes rapid isolation of organic colloids, as well as their bound inorganic colloids, can be harvested in the field, concentrated, and applied to roughing filters to enhance clay and microbe capture on roughing filters. This method will embrace the concept of sustainability utilizing local surface water or generating a value-added product from the local wastewater treatment plant for enhancement of drinking water quality.