UV LEDs, which emit light at relatively narrow bandwidths are a promising technology due to their potential for significantly high power efficiencies and long lifetimes.

A literature review will be compiled to identify specific wavelengths of importance for the inactivation of pathogens of interest. These pathogens will include enteric viruses, bacteria, and protozoa. Tailoring multiple wavelengths is a way to optimize inactivation of target pathogens at a relatively low energy cost. Ideally, a tailored reactor would target bacteria, protozoa, and viruses by combining a wavelength from the dominant germicidal region (250 - 280 nm) with a wavelength from the polypeptide absorbance region below 240 nm (i.e. 230 nm). This type of combination would simulate the advantages of the polychromatic UV emissions from a medium-pressure mercury lamp, yet be much more efficient, targeted, and tailored for specific inactivation outcomes, rather than just a broadband UV exposure.

Given the resources available and the current state of UVLED development, it makes sense to tailor wavelengths for optimum disinfection by combining a wavelength at the peak absorbance of DNA (260 – 265 nm) with one from the peak absorbance of many amino acids (such as 280 nm). For this task, the UV dose response of viral surrogates such as MS2, T1 and PRD1 phage, as well as bacterial indicators such as E. coli and Enterococci will be examined using an LED collimated beam-type unit containing 265 and 280 nm LEDs and will be compared with the dose responses of a LP and MP lamp. We also have capabilities to evaluate adenoviruses via cell culture and direct DNA damage using a qPCR assay, pending initial results and the potential to learn more by examining UV action per wavelength more mechanistically. Figure 5 illustrates the emission spectra  of LP,  MP  and  the  proposed  UVLEDs. In addition, single wavelength LEDs (265 or 280nm only) will be evaluated.  Other combination of nm-specific LEDs may also be explored pending the results of this initial testing. Phage infectivity and bacterial colony forming units will be used to gauge the effectiveness of the tailored-wavelength unit. To support this, a benchtop UV LED system capable of emitting UV irradiation from either single or combined LEDs, is being supplied through a partnership with the UV manufacturer Aquionics and used for testing in dose response experiments. This partnership between CU Boulder and Aquionics has already been established through numerous collaborations on other UV-related projects. 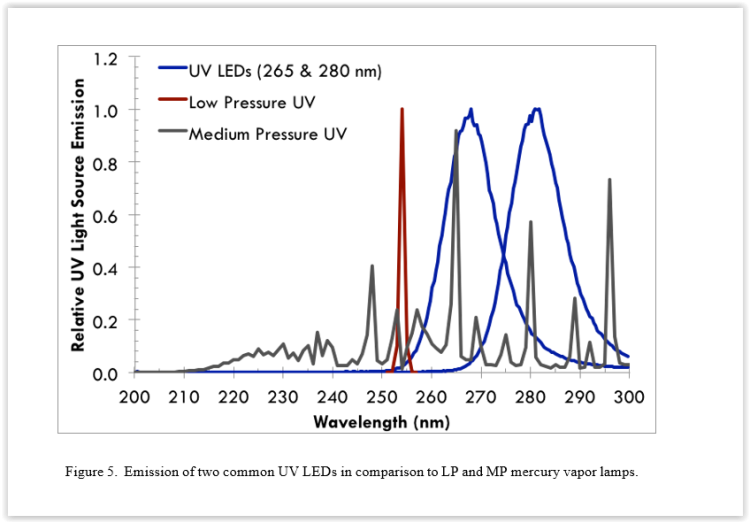 Task 2
Evaluate the design and construction of an LED-based UV disinfection flow-through system.

UV manufacturing partner Aquionics has under development a UVLED based system that will be appropriate for small systems. Based on Task 1, a recommendation will be made on optimization of UVLED wavelengths. The system will be deployed in conjunction with the Colorado water treatment pilot plant local to Boulder to study efficiency issues around the placement of UV LEDs within the reactor, the impact of water quality on treatment, and internal reflection for photon recycling. In addition to spiking in challenge testing organisms such as MS2 phage and E. coli to study disinfection effectiveness over ranges of water quality and flow, tracer studies will be performed to understand and optimize the hydraulic regimes to enhance the disinfection potential in the UV system.

Task 3
Test the optimized system at a field site to evaluate system sustainability and performance relative to MP UV technology.

As part of Center Project 1, Activity 6, Professor Malley will be testing a MP UV system for meeting inactivation standards for viruses and other pathogens.  During Task 3, we will work with the Malley project at a site in New Hampshire to run a side-by-side (or sequential) comparison between the MP UV and the UVLED system for similar suites of indigenous microorganisms and water quality parameters, as well as run some spiking studies using viral surrogates like MS2 phage. During the field testing, the UVLED system will be run for a minimum of 6 months, and similar to the MP system, monitored for wavelength and UV intensity using a UV sensor readings continuously and monthly monitoring of human enteric viruses before and after treatment, fecal coliforms, heterotrophic plate count bacteria and regulated DBPs. Operational monitoring will include water flow, energy use, and operation and maintenance requirements and their costs. A parallel effort regarding evaluation of system sustainability (Described in Project 1) will be performed to allow comparison of the two UV systems.