The Dark Ages Radio Explorer (DARE) will probe the epoch of formation of the first stars, black holes, and galaxies, never before observed, using the redshifted hyperfine 21-cm transition from neutral hydrogen. These first objects to illuminate the universe at the end of the dark ages into the cosmic dawn (redshifts 35 to 11) will be studied via their heating and ionization of the intergalactic medium.

Over its lifetime of two years, DARE observes at low radio-astronomy frequencies, 40-120 MHz, in a 125 km altitude lunar orbit. The Moon occults both the Earth and the Sun as DARE makes observations above the lunar farside, shielding the spacecraft from the corrupting effects of radio interference, Earth's ionosphere, and solar emissions. A wideband dual bicone antenna, pilot tone stabilized polarimetric receivers to separate the unpolarized 21-cm signal from polarized instrumental and sky emission, and a digital spectrometer constitute the science instrument. DARE’s radiometer has a well-characterized spectral response, controlled systematics, and heritage from cosmic microwave background (CMB) missions and ground-based telescopes. The unique frequency structure of the 21-cm signal and its uniformity over large angular scales are unlike the spectrally featureless, spatially varying characteristics of the galactic foreground, allowing the signal to be separated from the foreground. With a straightforward measurement, proven technology, and radio-quiet environs, DARE will open a new window of discovery into the early Universe. 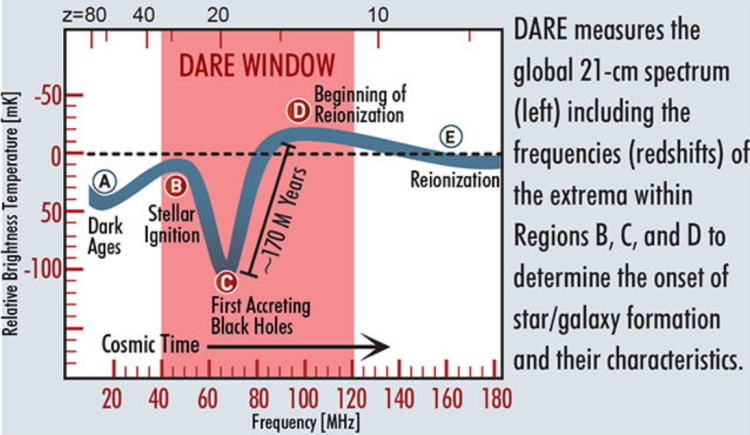 Graph showing the relative brightness temperature on the y axis and the cosmic time and frequency on the x axis. DARE measure the global 21-cm spectrum including frequencies (redshifts) of the extrema within regions B (stellar ignition), C (first accreting black holes), and D (beginning of reionization) in order to determine the onset of star and galaxy formation and their characteristics.

DARE realizes NASA's strategic objective in astrophysics to, "Explore how (the Universe) began and evolved." It also executes the small-scale mission described in the Astrophysics Roadmap, "Mapping the Universe's hydrogen clouds using 21-cm radio wavelengths via a lunar orbiter from the farside of the Moon." Finally, it addresses two fundamental questions identified in the recent Decadal Survey, New Worlds, New Horizons in Astronomy and Astrophysics, What were the first objects to light up the universe, and when did they do it? 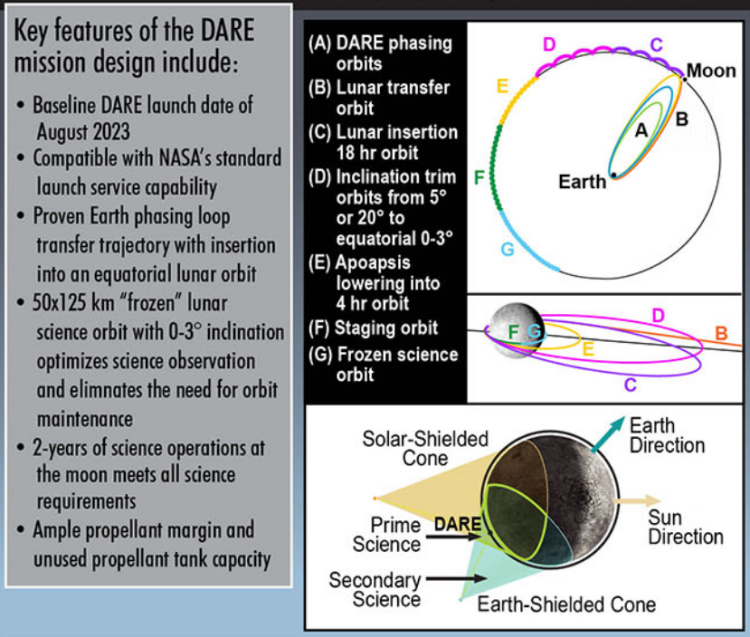 To accomplish these objectives, DARE will measure the spectral shape of the sky-averaged redshifted 21-cm signal from neutral hydrogen over the redshift range 11-35 (80-420 million years after the Big Bang), corresponding to radio frequencies 40-120 MHz.

DARE explores a new epoch in cosmology, bridging between the z~1100 Universe observed with COBE/WMAP/Planck, and galaxies observed at z~6-10 with the Hubble Space Telescope. The James Webb Space Telescope (JWST) will soon extend Hubble’s efforts and observe some of the earliest galaxies ~300-400 million years after the Big Bang, while other facilities operating between radio and X-ray wavelengths will observe these sources in complementary ways. JWST cannot address our science objectives because it can only observe the brightest galaxies at z>10. DARE measures the collective effects of all sources in the range z=35-11, which form an unresolvable background of fainter objects that likely dominate the total emissivity of the early universe.

Observations of the sky-averaged redshifted 21-cm signal are challenging because the signal strength is predicted to be much fainter than the astrophysical foregrounds and interferences. However, by taking data when the instrument is above the farside of the Moon, DARE eliminates powerful sources of interference, including the Earth's ionosphere and human-generated radio-frequency interference (RFI). Exhaustive experimental and theoretical efforts have demonstrated that DARE must be placed in the pristine environs of the lunar farside to guarantee success.

To recover the cosmological signal and estimate its physical parameters in the presence of strong astrophysical foregrounds, DARE employs a robust Bayesian data analysis pipeline, which accounts for all uncertainties involved in the measurement, and takes advantage of prior information from precise characterization of the instrument and from independent estimates of the foregrounds. DARE draws on a rich intellectual and technological heritage from ground-based low-frequency instruments, as well as antennas, receivers, and spacecraft that have flown in similar space environments. It capitalizes on the experience, lessons learned, and proven performance of EDGES, a ground-based pathfinder operating in Western Australia, as well as of the new Cosmic Twilight Pathfinder (CTP) initiative at NRAO Charlottesville, operating at the high-frequency part of the DARE band.

Ground-based radio telescopes operating at 100-200 MHz, such as EDGES-High, MWA, LOFAR, and PAPER, are attempting to study the end of reionization. The HERA and SKA interferometers will offer exquisite constraints on most of that process using the 3D power spectrum. However, DARE’s measurement of the average 21-cm signal – not accessible with these interferometers – will break degeneracies in the results from HERA and SKA by determining whether features observed by these interferometers are due to heating or reionization of the intergalactic medium, thus providing crucial boundary conditions for discerning cosmological models. The LEDA, SCI-HI, and EDGES-Low instruments overlap with portions of the DARE band, are important technology/engineering precursors, and might make a detection in some part of the low band if they can overcome systematics related to their ground-based environments. Such a detection would help DARE characterize the 21-cm signal just as ground-based detections of the CMB aided its characterization by COBE. Since DARE team members are principal investigators or co-investigators on many of these telescopes (e.g., EDGES, HERA), we are actively leveraging technologies, calibration techniques, and software, and we will coordinate results with these ground-based telescopes.