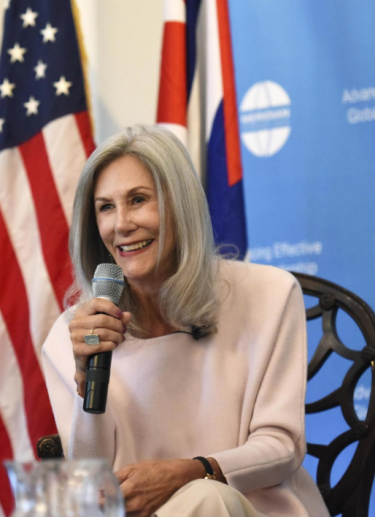 Ambassador Vicki Huddleston led American diplomatic missions in Mali, Madagascar, Ethiopia and Cuba; was a senior advisor to the secretary of defense and the U.S. Military Command for Africa; and managed a U.S. Agency for International Development project in Haiti. She was the deputy assistant secretary of state for Africa with oversight responsibility for the administrative operations of the Africa Bureau and U.S. missions abroad. She was acting ambassador to Ethiopia, ambassador to Mali, and to Madagascar. Huddleston managed American policy toward Cuba as the coordinator of Cuban affairs in Washington, D.C., and carried it out as the principal officer at the U.S. Interests Section in Havana—our diplomatic mission in Cuba before it became an embassy in 2014.

After leaving the State Department, Huddleston became a visiting fellow at the Brookings Institution, where she co-led a project on U.S.-Cuba relations that resulted in a book, Learning to Salsa: New Steps in U.S.- Cuba Relations, that provides a blueprint for normalization of U.S. relations with Cuba. She is currently writing a memoir on Cuba, Our Woman in Havana: The Long Struggle to Overturn Castro's Revolution.