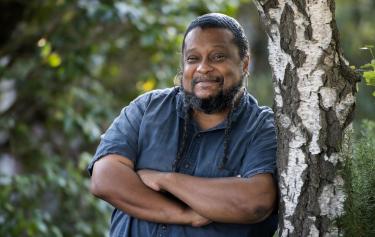 Professor and Department Chair of Integrative Biology at the University of California, Berkeley, Tyrone Hayes is best known for his research on the agricultural herbicide atrazine that demonstrates its interference with the development of amphibians' endocrine systems. In addition to a significant body of research, Tyrone has been the subject of books, articles, and short films including the children’s book, The Frog Scientist, articles in Mother Jones, the New Yorker, a mini-documentary, What’s Motivating Hayes? by film director Jonathan Demme, and a recent academic paper that highlights Tyrone’s experiences as an example of how industry undermines inconvenient research to the detriment of human health and the environment.

Tyrone Hayes grew up in South Carolina, and, as a child, one of his favorite pastimes was observing and studying the frogs, snakes and other wildlife that lived in the wetlands near his home. His fascination with frogs continued at Harvard University, where he studied organismic and evolutionary biology. He later received a Ph.D. in integrative biology from the University of California, Berkeley.

Dr. Hayes was elected in 2021 to the American Academy of Arts and Sciences (AAAS), a 241-year-old organization honoring the country’s most accomplished artists, scholars, scientists and leaders who help solve the world’s most urgent challenges. His research reveals the crucial link between conservation and health and the impacts of agricultural practices on biodiversity.