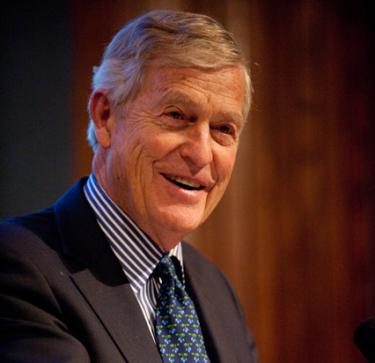 Timothy E. Wirth is the vice chairman of the board of the United Nations Foundation and the Better World Fund. He previously served as the foundation’s president from its founding in 1997 until his transition to vice chair in 2013. The UN Foundation and its sister organization, the Better World Fund, were founded in 1998 through a major financial commitment from Ted Turner and are designed to support and strengthen the work of the United Nations.

Wirth began his political career as a White House fellow under President Lyndon Johnson and served as deputy assistant secretary for education in the Nixon Administration. Wirth returned to his home state of Colorado in 1970 and successfully ran for the U.S. House of Representatives in 1974. He represented Denver suburbs from 1975 to 1987. He was elected in 1986 to the U.S. Senate, where he focused on environmental issues, particularly global climate change and population stabilization. Wirth was national co-chair of the Clinton-Gore campaign, and from 1993 to 1997 served in the U.S. Department of State as the first undersecretary for global affairs.

The recipient of numerous awards and honorary degrees, Wirth is a member of the American Academy of Arts and Sciences and was recently named a Champion of the Earth by the United Nations Environment Programme.

Wirth is married to Wren W. Wirth, the president of the environmentally focused Winslow Foundation; they have two grown children and five grandchildren. suburbs from 1975 to 1987.