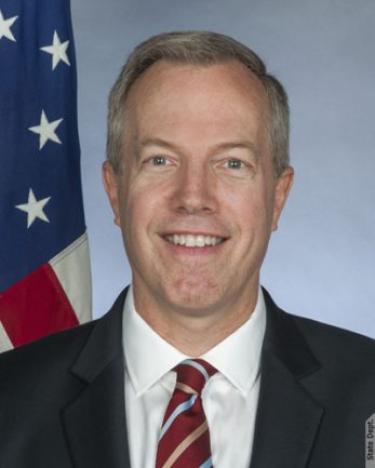 Ambassador to the Socialist Republic of Vietnam, U.S. Department of State
2017 Speaker

A career member of the Senior Foreign Service, class of minister-counselor, Ted Osius presented his credentials to President Truong Tan Sang on December 16, 2014, becoming the sixth U.S. ambassador to the Socialist Republic of Vietnam.

Prior to his confirmation as ambassador, Osius was associate professor at the National War College and senior fellow at the Center for Strategic and International Studies. He served as deputy chief of mission at the U.S. Embassy in Jakarta, Indonesia, and political minister-counselor at the U.S. Embassy in New Delhi, India. Osius also served as deputy director of the Office of Korean Affairs at the State Department, regional environment officer for Southeast Asia and the Pacific, and senior adviser on international affairs at the Office of the Vice President. Early in his career, Osius helped open the U.S. Consulate General in Ho Chi Minh City and was one of the first U.S. diplomats at the U.S. Embassy in Hanoi. He also served in the United Nations, the Holy See and the Philippines.

Prior to joining the Foreign Service, Osius worked in the office of Sen. Albert Gore, Jr., and as a presidential intern at the U.S. Embassy in Cairo, Egypt. He earned a bachelor’s degree from Harvard College and a master’s degree from Johns Hopkins School of Advanced International Studies.