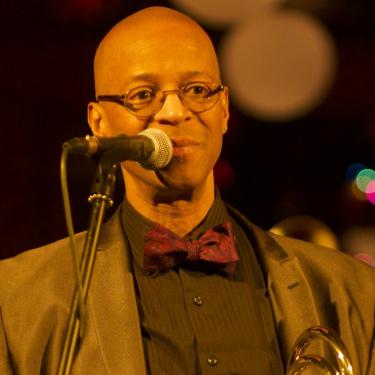 New York City based musician Ron Wilkins has been performing on tenor and bass trombones, euphonium, tuba, bass trumpet and vocals for over forty years. He has performed at the highest levels touring around the world with his own groups as well as premiere artists. He runs his own New York City big band alongside trombonist Rebecca Patterson which features their writing and includes some of New York City's premiere musicians . Ron’s uncanny musicianship has led him to perform in many diverse musical genres.

He was a featured artist on bass and tenor trombones at the International Trombone Festival in 2002 at the University of North Texas. Ron is a former member of the USAF Band of the West at Lackland AFB in San Antonio. Ron also has an extensive background as an educator. He has performed as a guest artist at from the elementary to university levels, jazz festivals, and has maintained his own private studio for decades. He has held positions at several colleges including the University of Texas at San Antonio, University of Incarnate Ward, Texas State University, Texas Lutheran University, Northwest Vista College, St. Mary’s University, teaching low brass, jazz studies, and vocals. Ron has two cds as a leader, "A Tribute To The Masters" (2000) and "The Bundee Brothers Bone Band" (2005) with former Ringling Brothers lead trombonist, Bill Gibson. As of October 2012, he was featured on a live recording with the Frank Wilkins trio (Boston, MA) at the Fishmonger Café in Cape Cod, MA.

Ron currently maintains his own private teaching studio and works with the New York Jazz Academy. Ron is a Shires trombone artist and plays Giddings mouthpieces. He has worked with Ivan Giddings to create his own signature line of mouthpieces.