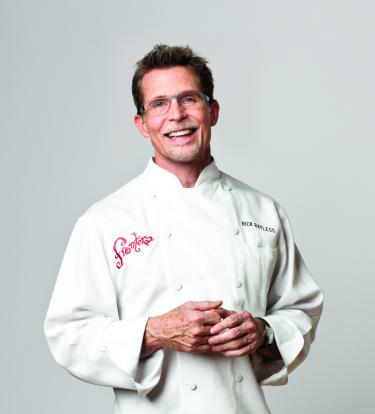 PBS Chef, Mexico; One Plate at a Time, and Founder of Chefs Collaborative
2017 Speaker

Most people know Rick Bayless from television: for winning the title of Bravo TV’s Top Chef Masters with his authentic Mexican cuisine, and for his public television series, Mexico–One Plate at a Time, which has wrapped its 11th season.

Bayless’ award-winning restaurants are side by side in Chicago: the casual Frontera Grill, founded in 1987, and the more elegant Topolobampo, opened in 1991. These successes were followed by the fast-casual Xoco, the quick-service Tortas Frontera, and Frontera Fresco. In 2016 Bayless opened two new restaurants in Chicago’s bustling West Loop neighborhood—Leña Brava and the adjacent Cervecería Cruz Blanca—as well as Frontera Cocina in Disney Springs near Orlando, Florida.

Bayless has published nine cookbooks. Mexican Kitchen and Mexico–One Plate at a Time each won cookbook of the year awards, and Fiesta at Rick’s spent a number of weeks on the New York Times best seller list.

In 2007 Bayless was named Humanitarian of the Year by the International Association of Culinary Professionals for his philanthropic endeavors. His Frontera Farmer Foundation was founded in 2003 to award grants for capital improvements to small midwestern farms; and the Frontera Scholarship, launched in 2007, provides full tuition for a Mexican-American Chicago public school student to study culinary arts at Kendall College.

The Government of Mexico has bestowed on Bayless the Mexican Order of the Aztec Eagle–the highest decoration bestowed on foreigners whose work has benefitted Mexico and its people.