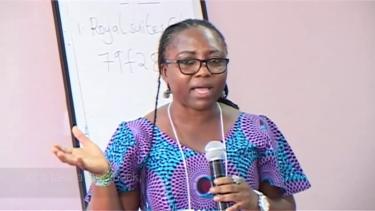 Pauline Vande-Pallen is a Programme Officer on Gender and Economic Policy in TWN-Africa. She has almost two decades of experience of working on Ghanaian, African and global gender and economic policy issues. Pauline is the current Convener of Netright, a Ghanaian national coalition hosted by TWN-Africa, which is engaged in research, advocacy and policy dialogue on gender and economic justice issues. Pauline’s  other current roles in TWN-Africa include her acting as the focal point for the Ghana National Coalition on Mining (NCOM), a grouping of community groups in mining areas and CSOs defending human and environmental rights and working for the optimum utilization of Ghana’s mineral resources. TWN-Africa serves as the secretariat of the NCOM. She is also part of the TWN-Africa team working on the Africa Mining Vision and the ECOWAS Civil Society Mining Platform. She was part of the TWN-Africa team that led the implementation of the Gender and Economic Reforms in Africa (GERA) Programme. GERA was a multi-country research and advocacy programme hosted by TWN-Africa, in succession to the North-South Institute, which brought academics and activists together to carry out two rounds of research and advocacy on gender and economic policy issues in Africa. The first set of studies on the gender impacts of SAPs resulted in the book "Demanding Dignity". The second round, on gender, trade and investment in Africa produced research reports and advocacy in target countries. Pauline was educated at the University of Ghana (BA in French and Psychology) and the Institute for Social Studies (ISS), the Hague, Netherlands (MA in Development Studies).