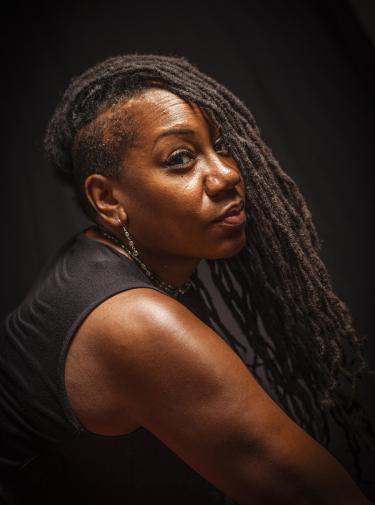 From her home on the coast of Italy’s beautiful Lake Garda, Lisa Marie Simmons collaboratively leads two different ensembles – Hippie Tendencies and NoteSpeak – with keyboardist, arranger, and songwriter Marco Cremaschini, each deeply but differently informed by the struggles and triumphs in Simmons’ own life.

Born in Colorado, Simmons began singing at a very young age and was featured soloist with the Boulder Youth Choir. At 19, she moved to New York City to study theater and music at The American Academy of Dramatic Arts and perform in pop, funk, soul, blues and jazz bands throughout the Manhattan club circuit at night.

From 1993 until 1997, Simmons explored and performed music in Amsterdam, Costa Rica, St. Maarten and France, where she began to compose her own music and lyrics. She continued her travels through Central and South America, and eventually returned to Europe.

Simmons teamed with Paola Peroni (aka D.J. Groovy), under the moniker Bacon Popper. Their first single (“Free”) exploded on the 1998 European club scene, reaching #1 on the dance singles chart in France and #2 in Italy. Their second single (“Rejoice in Love”) was quickly followed by a full-length album for which Simmons wrote every lyric.

She stepped out as a solo artist in 1999 with her first single (“Feel It”) and continued to collaborate with various artists and producers throughout Italy. She released her last single as a solo artist (“I Won’t Be Waiting,” with producer Emanuela Gubinelli) in 2004.

Since then, Simmons and Cremaschini have divided most of their attention between the neo-folk, neo-soul project Hippie Tendencies and spoken-word-jazz project NoteSpeak.  Hippie Tendencies has released two full-length albums and their cover of “Here’s To You/The Ballad of Sacco and Vanzetti,” which recants the execution of two Italian immigrants wrongly convicted for murder during a 1920 armed robbery in Massachusetts, was adopted by Amnesty International as the theme for their #herestoyou campaign. They are also artists in residence at Lou Casteou in the South of France, where they teach a songwriting course twice a year called “How to write and enduring song rather than a hit song.”

The American debut of NoteSpeak took place at the Jaipur Literature Festival in Boulder Co. in September 2017. "NoteSpeak performed at the closing of the literary festival JLF@Boulder and blew the lid off the house. They had the audience on their feet throughout the incredible 90-minute set! A pure treat!" says Sanjoy K. Roy  Managing Director of Teamwork Arts, co-founder, producer of the Jaipur Literature Festival.

Her creativity also encompasses composing with and for artists in other, different genres, including Italian Rock ‘n’ rollers Plan de Fuga; American roots music on Lisa Bell’s The Italian Project; and soulstress Cheryl Porter. Porter performed “Consequence,” co-written by Simmons and Cremaschini, with Padova’s Symphonic Orchestra from the Conservatorio di Musica “Cesare Pollini” in Padova and with the American Youth Philharmonic Orchestra in Washington, D.C., for the “Two Countries, One Heart” initiative co-sponsored by the American Initiative for Italian Culture, the American Youth Philharmonic Orchestras and the Italian Cultural Institute in Washington.