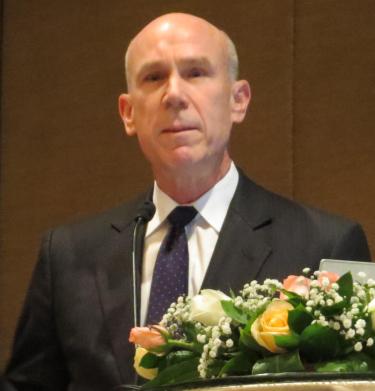 Larry Greenwood is senior adviser to the BowerGroupAsia, a government-relations consulting firm in Washington D.C. He lives and works in the San Francisco Bay Area. He was president of the Japan Society of Northern California until stepping down at the end of 2019.

Greenwood worked four years in Tokyo, where he managed government relations throughout Asia for MetLife, and for five years in Manila, Philippines, where he co-led the Asian Development Bank and was responsible for about $7 billion of development lending a year.

From 1976-2006 he served as a U.S. diplomat in overseas assignments at the embassies in Tokyo, the Philippines and Singapore and in a variety of other jobs at the State Department, including as ambassador to the Asia Pacific Economic Cooperation (APEC) group and principal deputy assistant secretary for economic and business affairs. Greenwood is a non-resident senior associate at the Center for Strategic and International Studies, one of the most prominent think tanks on international issues in Washington D.C. He serves on the boards of the Japan Society of Northern California and Capital Sisters, a non-profit that funds micro-loans for poor women in emerging economies.

He holds a BA from Eckerd College in St. Petersburg, FL, and an MALD from the Fletcher School of Law and Diplomacy in Medford, MA. He speaks and reads English, Japanese and French.