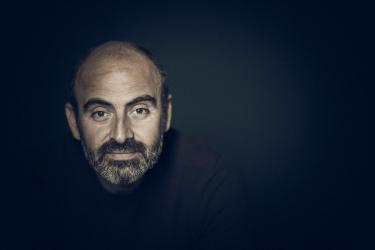 Hailed as “intensely soulful” and a “virtuoso” by The New York Times and “spellbinding” by The New Yorker, Winner of OpusKlassik award in 2019 clarinetist and composer Kinan Azmeh has gained international recognition for what the CBC has called his “incredibly rich sound” and his distinctive compositional voice across diverse musical genres.

Originally from Damascus, Syria, Kinan Azmeh brings his music to all corners of the world as a soloist, composer and improviser. Notable appearances include the Opera Bastille, Paris; Tchaikovsky Grand Hall, Moscow; Carnegie Hall and the UN General Assembly, New York; the Royal Albert hall, London; Teatro Colon, Buenos Aires; Der Philharmonie, Berlin; the Library of Congress, the Kennedy Center, Washington DC; the Mozarteum, Salzburg, Hamburg’s Elbphilharmonie; and in his native Syria at the opening concert of the Damascus Opera House.

He has appeared as a soloist with the New York Philharmonic, the Seattle Symphony, the Bavarian Radio Orchestra, the West-Eastern Divan Orchestra, the Qatar Philharmonic and the Syrian Symphony Orchestra among others, and has shared the stage with such musical luminaries as Yo-Yo Ma, Daniel Barenboim, Marcel Khalife, John McLaughlin, Aynur and Jivan Gasparian.

An advocate for new music, several concertos were dedicated to him by composers such as Kareem Roustom, Dia Succari, Dinuk Wijeratne, Zaid Jabri, Saad Haddad and Guss Janssen, in addition to a large number of chamber music works.

Kinan’s upcoming projects include solo appearances with several orchestras, a number of tours with his New York “Arabic-jazz” quartet the Kinan Azmeh CityBand, and with his ensemble Hewar and a new project with the NDR big band. His latest album “Uneven Sky” with Berlin’s Deutsches Symphony Orchestra has recently won the Opus Klassik Award.

Kinan serves as artistic director of the Damascus Festival Chamber Players, a pan-Arab ensemble dedicated to contemporary music form the Arab world.  He has also been playing with the Silkroad Ensemble since 2012, whose 2017 Grammy Award-winning album “Sing Me Home” features Kinan as a clarinetist and composer.

Kinan Azmeh is a graduate of New York’s Juilliard School as a student of Charles Neidich, and of both the Damascus High institute of Music where he studied with Shukry Sahwki, Nicolay Viovanof and Anatoly Moratof, and Damascus University’s School of Electrical Engineering. Kinan earned his doctorate degree in music from the City University of New York in 2013.