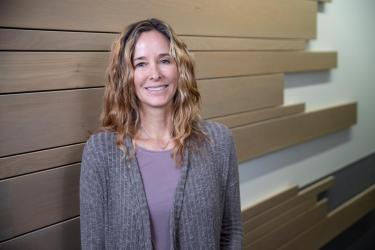 Julienne Stroeve received a PhD in geography from the University of Colorado Boulder in 1996 for her work in understanding Greenland climate variability. Afterwards she became a senior research scientist at the National Snow and Ice Data Center within the Cooperative Institute for Research in Environmental Sciences at CU Boulder. More recently she was a professor at University College London, and she was awarded a Canada excellence research chair at the University of Manitoba.

Stroeve’s Arctic research interests are wide-ranging and include sea ice forecasting at seasonal, decadal and longer-term time scales; and climate change and impacts on native communities. She has participated in several field campaigns in Greenland, the Arctic Ocean and the lower 48. Efforts over the past decade have increasingly focused on trying to make sense of the rapid environmental changes being observed in the Arctic and what these changes will mean for the rest of the planet.

Stroeve’s work has been featured in numerous magazines and news reports, radio talk shows and TV documentaries. She has given keynote addresses around the world on Arctic climate issues and briefed former Vice President Al Gore and congressional staff. She has published more than 80 articles in peer-reviewed journals and contributed to several national and international reports on climate change. For five years in a row Stroeve has been named by Clarivate Analytics as one of the most highly cited researchers.