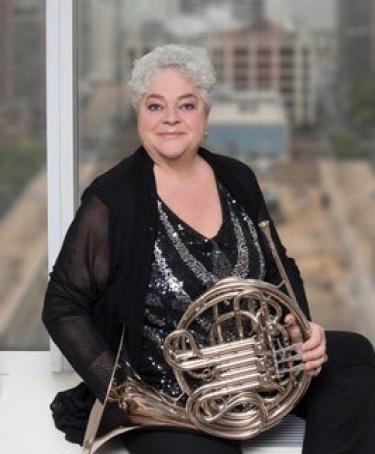 Principal horn with the Metropolitan Opera Orchestra for 25 years, Julie Landsman is a distinguished performing artist and educator. She received a Bachelor of Music degree from the Juilliard School in 1975 and has served as a member of the Juilliard faculty since 1989.

A native of Brooklyn, New York, Landsman achieved her dream of becoming principal of the Met in 1985 and held that position until 2010. She has also shared her talent with other ensembles: she is a current member of the Orpheus Chamber Orchestra and has performed and recorded with the New York Philharmonic; she has held positions with the Houston Symphony, the St. Paul Chamber Orchestra, and the Philadelphia Orchestra; and she has performed as chamber musician at countless festivals and concert series.

Landsman is most famous for her performance of Wagner’s “Ring” cycle as solo horn with the Met Opera under the direction of James Levine. She has recorded for several major labels.

World-renowned as a master teacher, Landsman holds faculty positions at the Juilliard School and Bard College Conservatory and teaches frequently as a guest at the Curtis Institute. She has presented master classes at many distinguished musical institutions here and abroad and is a visiting master teacher at Miami’s New World Symphony. Landsman’s students hold positions in the Met as well as in numerous other prestigious orchestras across the country. Recently her series of Carmine Caruso lessons on YouTube has led to further fame among today’s generation of horn players.