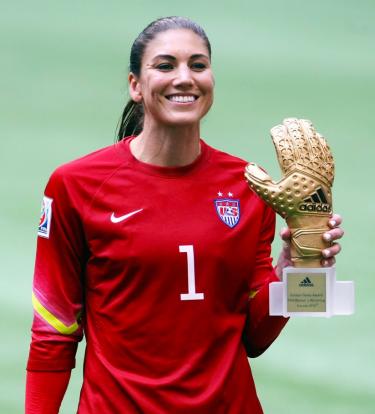 A World Cup Champion, two-time Olympic gold medalist and winner of the 2011 and 2015 FIFA World Cup Golden Glove awards, Hope Solo is widely regarded as the best goalkeeper in the world. She has more caps, wins, shutouts and starts than any other goalkeeper in U.S. history. In 2015, she achieved her lifelong dream as a player, delivering the USWNT its first World Cup title since 1999.

A native of Richland, Washington, Solo landed on the U.S. U-14 team at the age of 12 and went on to play for the United States in every single age group. As she climbed the ranks, she learned the challenges early on of being an economically disadvantaged player in the youth system, and relied on the generosity of friends, family and her home state to fuel her aspirations.

Following an illustrious collegiate career at the University of Washington, Solo played in every iteration of women’s professional soccer in America including the now defunct WUSA, WPS and W-League, and most recently, the NWSL Seattle Reign.

Solo is recognized as a leader in the fight for equal pay and in 2016, was one of five members of the USWNT to file a wage discrimination claim against the Federation. She has been an influential voice on and off the field, sharing the stage with U.S. senators, heads of state, business leaders and global activists from around the world advocating for women’s rights and gender equality.