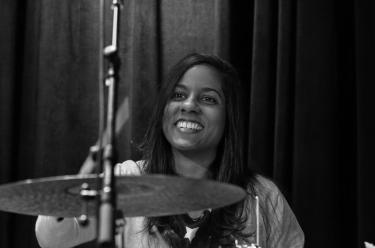 Helen De La Rosa is a 25-year-old Dominican drummer. After graduating from the National Conservatory of Music of Santo Domingo, she received a presidential scholarship to Berklee College of Music where she received her bachelor’s degree in performance with a minor in music production and engineering in 2016.

De La Rosa received the Terri Lyne C. award for two years in a row (2014–15), went on tour with world-renowned saxophone player, Donny McCaslin (May 2016); won the 2016 Hit Like a Girl drum contest; played with world-renowned bass player Victor Wooten; worked with famous musical duo Wendy & Lisa (who worked with Prince), with Grammy award winning producer Javier Limón, and with Antonio Serrano (former harmonica player for Paco de Lucia); and played for Hillary Clinton. She also participated as a Berklee student ambassador to India (November 2015) were she gave several master classes in Mumbai and New Delhi and played with the virtuoso bass player Mohini Dey. De La Rosa has worked as a drummer and engineer for Amalur, with whom she toured in Central America in May 2015, where they performed and gave several master classes. De La Rose is a driven young woman who loves music and is dedicated to encouragng and inspiring others. One of her main goals in music is to break with the paradigms and limitations often imposed on women in the music industry. That’s why teaching has always been part of her passion.