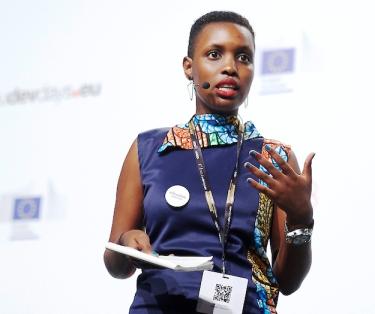 Esther Nakajjigo is Uganda's Ambassador for Women and Girls a title she obtained at 17. She is hailed in Uganda for her generosity when she sacrificed her University education and donated all the tuition to start a not for profit community health facility to rescue 1.5 million most vulnerable members of community. She owns “Saving Innocence” Challenge, Africa’s best high school reality television show of urban teenage girls braving Uganda's hard to reach communities to save rural teenage girls from child marriages.

Esther is a European Commission Young Leader and a United States Department of State Young African Leader. She is a member of the Women Ambassadors’ Forum in Dallas, Texas and a Youth Expert at the African Union-European Union Youth Cooperation Hub in Addis Ababa. Esther is also a Commonwealth Youth Trainer.

Amidst the world's refugee and migration crisis, Esther is championing LIFT (Living in the Face of Trauma) a universities’ challenge for peace through creating decent lives for refugee women and girls while nurturing peaceful co-existence in the world's largest refugee settlement – Bidibidi in Uganda.

She launched a Global Girls Movement in June 2018 in Brussels, Belgium where like-minded girls from universities around the world pull resources together to respond to the most challenging humanitarian concerns affecting the most vulnerable women and girls across the globe in a prevailing global funding crisis.

Esther holds 9 Awards, a Geneva Women's World Summit Prize and she is the 2018 Luff Peace Fellowship winner at Watson Institute in U.S.