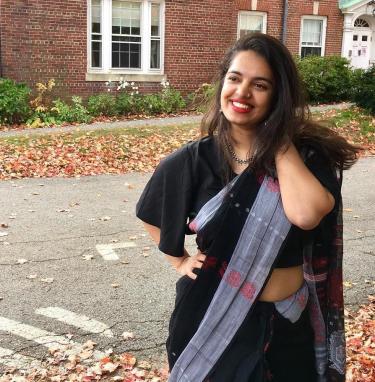 Diksha Bijlani is an internationally acclaimed spoken word poet from India. She won India’s first National Youth Poetry Slam with her college team, and featured at the College Unions Poetry Slam Invitational in Chicago. In 2016, she bagged runner-up in Button Poetry’sinternational poetry video contest with her poem "In Which I Resurrect Wonder Woman", making her the first poet from India to be featured on Button Poetry. She went on to win runner-up a second time in the Button Poetry video contest in 2017, this time with her poem "Translated Disney". This poem, which talked about glorification of the English language in post-colonial countries, won her acclaim from Indian media and she performed the piece at India’s first spoken word festival Spoken in Mumbai in 2017.

Diksha has been a featured poet for Bowery Poetry in New York, FEMS Slam in Cambridge, Women In Power conference at Harvard University, and the Toronto International Festival of Authors, amongst others. Her work, though thematically expansive, embodies the central belief that our personal stories, and our empathy for others’ stories, is the most powerful force in the world.

Diksha is a Public Policy graduate from Harvard Kennedy School, and currently works in climate change at the World Bank. Social justice, public service, and reclaiming the right to dissent form a big part of her life and poems. She has been a critic of the Indian government's clampdown on students' right to dissent and her poem "Songs of Dissent" was performed during the period of state-sanctioned violence on Indian college campuses in 2016. During her performance as a featured poet for The Wire, she questioned the dehumanized nature of policy making in India through her poem "In the Government",reflecting her experience of working with the government.

Diksha's work pans across themes emerging from her life as a brown woman. She called out the toxic TV show culture in India through her poem "Dear Ekta Kapoor", which grabbed her praise from the Indian media. Diksha majored in Applied Psychology, and the theme of mental health is also a big part of her work. Her poem "High Functioning Depression" brings to light a kind of depression that is found in people who are productive, for whom work is often a coping mechanism, and she performed it during her feature at India’s first Mental Health Festival in Delhi.

Diksha's journey as a poet and activist has been featured in media platforms such as The Telegraph, Ramona Magazine, Indian Express, The Hindu, amongst others.