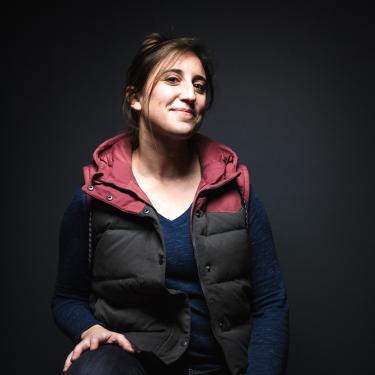 Deia Schlosberg made national news in October, 2016, when she was arrested and charged with 45 years' worth of felonies for filming the #ShutItDown pipeline protest in North Dakota.

Schlosberg is directing the docuseries Bootstraps, as well as The Story of Plastic, the Story of Stuff organization's first feature film. She produced Josh Fox's climate change film, How to Let Go of the World and Love All the Things Climate Can't Change (Sundance/HBO). She also co-produced Awake, A Dream from Standing Rock (Tribeca/Netflix) and The Reluctant Radical (2018), a portrait of one climate activist’s personal struggle with global catastrophe. She co-directed and produced Cold Love, a look at the 25-plus-year career of explorer Lonnie Dupre's journeys to the world's coldest places and the climate change impacts that he witnessed.

Schlosberg earned an MFA in science and natural history filmmaking at Montana State University, where she directed and produced Backyard, which looks at the human cost of fracking.The film won two student Emmys (Best Documentary and Bricker Humanitarian Award) and screened at film festivals around the world, winning several audience choice and special jury awards.

Schlosberg was awarded the 2009 National Geographic Adventurer of the Year award for a two-year, 7800-mile through-hike of the Andes Mountains.