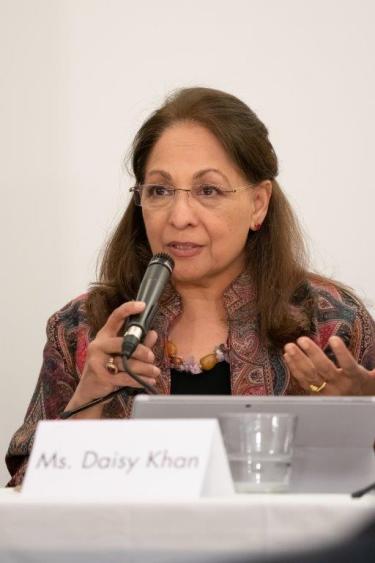 Daisy Khan is an award-winning speaker, author, activist, commentator, and the founder of Women’s Islamic Initiative in Spirituality and Equality (WISE), the largest global network of Muslim women committed to peacebuilding, gender equality, and human dignity.

She has been involved in grassroots efforts combating anti-Muslim bias for over twenty years and is renowned as a thought leader on Muslim women’s rights, Islam in America. As an bridge builder she has been hailed for producing interfaith programs like Same Difference, the Cordoba Bread Fest and the “Today, I am a Muslim Too” rally.

Khan believes that women’s leadership is essential to solving societal issues. “we need to remove structural barriers to Muslim women’s leadership, to enable them to use their resolve, passion and humility to bring societies into greatness.” She founded the first global Muslim women’s Shura (advisory) Council to amplify Muslim women’s scholarship. The Council uses an egalitarian interpretation of scripture to publish position papers against issues such as child marriage, domestic violence, female genital mutilation and many others.

Born in Kashmir, she spent twenty-five years as an interior architect for various Fortune 500 companies. In 2005, she dedicated herself to full-time community service and building movements for positive change, both in the United States and around the globe.