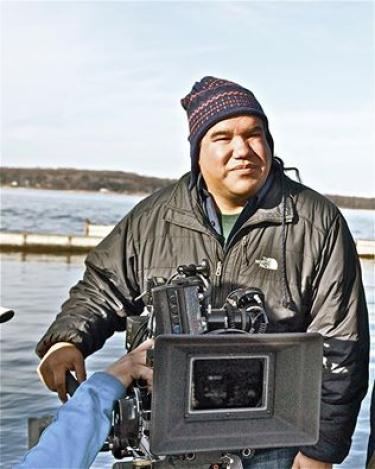 Chris Eyre, the nation's most celebrated American Indian film director, was born in Oregon. An enrolled member of the Cheyenne and Arapaho Tribes of Oklahoma, he gained national attention in 1998 with the movie Smoke Signals. People Magazine called him "the preeminent Native American filmmaker of his time."

Born in 1968 in Portland, Eyre was raised in Klamath Falls by his non-native adoptive parents, Earl and Barbara Eyre. While at Klamath Union High School—he graduated in 1987—he developed an interest in black-and-white photography. That interest led to his enrolling in the television production program at Mt. Hood Community College in Gresham. In 1991, he graduated from the University of Arizona with a degree in media arts. He returned to Oregon to make his first feature-length movie, Things Learned Young, inspired by his childhood and successful search for his birth mother, Rose Lumpmouth.

Eyre attended New York University's graduate film program from 1992 to 1995. His second-year film, the ten-minute-long Tenacity, was shown at film festivals worldwide, including the Sundance Film Festival, where it won several awards. At a Sundance directing workshop, he began developing Smoke Signals, which was bought by Miramar Films. The film won the Audience Award and Filmmaker's Trophy at Sundance and became the first nationally distributed feature film that was directed, written, co-produced, and featured American Indian actors.

“It’s really about the element of forgiveness," Eyre said of Smoke Signals, "something that’s universal and that’s one of the things that makes it endearing. In 20 years people can watch that simple movie and still be touched by it.”

He later directed Skins—shot entirely on the Pine Ridge Reservation in South Dakota—and Skinwalkers, Edge of America, Thief of Time, A Thousand Roads, and Taming the Wild West: The Legend of Jedediah Smith, along with commercials and television episodes of Law and Order and Friday Night Lights. In 2011, Eyre is finishing A Year in Mooring, a film by Salem writer Peter Vanderwal. "I'm into making movies that have something to say," Eyre said. "You've got to stand next to that piece of work....As a filmmaker you want to gain an audience that trusts you."

Eyre said that his upbringing is reflected in his work: "The rural sensibility, the Klamath Falls sensibility. I love pickups. I love driving. I love these aesthetics and putting them into movies.” With intended irony, he added: “I grew up like every other white middle class kid."

Eyre doesn't necessarily seek films with Indian themes. "For me," he said, "the story is about living vicariously with people and honoring them and their spirits. That is an endless journey. I don't get tired of storytelling. More than ever I'm dedicated to that idea."