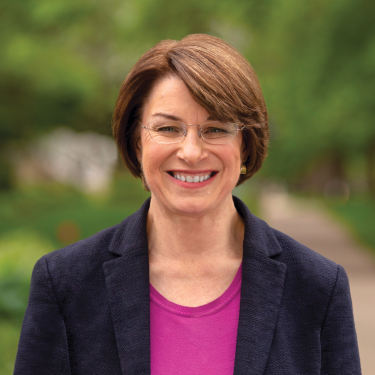 Amy Klobuchar is the senior U.S. Senator from Minnesota - the first woman elected to the United States Senate in Minnesota’s history. Prior to her time in the U.S. Senate, Klobuchar served as the Hennepin County Attorney. Since she arrived in the Senate, Senator Klobuchar has built a reputation for putting partisanship and politics aside in favor of strengthening our economy and helping middle-class families.

A recent Vanderbilt University study ranked Senator Klobuchar as the most effective Democratic senator in the last Congress. She is running for the Democratic nomination for president of the United States in the 2020 election. Klobuchar is a graduate of Yale University and the University of Chicago Law School.