Our ability to rise to the occasion and compete is something we are truly proud of.

'It Keeps you Humble' 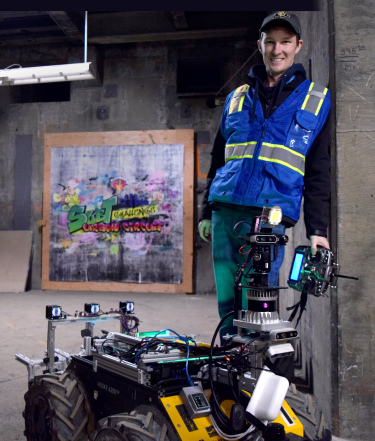 Michael Ohradzansky at the starting line of the Washington challenge course.

For mechanical engineering PhD candidate Michael Miles, participating in the national Subterranean Challenge robotics competition has provided real-world experience he might not otherwise have gotten during his graduate studies.

“Normally, you are making a robot that just has to work enough for a 3-minute video,” he said. “Then you publish a paper and visit a conference, and you are done. But running these complicated systems for over an hour in tough conditions? That is unlike robotics anywhere, and it keeps you humble.”

CU Boulder is one of several funded teams in the Sub-T Challenge, a high-stakes competition launched by the U.S. Defense Advanced Research Projects Agency to test ideas around autonomous robot use in difficult underground environments during search and rescue.

Each leg of the multiyear challenge tests how autonomous robots acting as first responders approach tunnels, caves and urban environments. That includes handling environmental factors like difficulty communicating through walls or unseen dangers like spilled hazardous material. MARBLE’s team of drones could provide answers to those issues by searching quickly, independently and without fear of the personal physical harm a human would have to consider.

The competition’s second challenge was in February 2020 near Seattle, with the October 2020 challenge shifted to a virtual setting. The final event is scheduled for this summer.

Sean Humbert, a professor in the Paul M. Rady Department of Mechanical Engineering, leads the CU Boulder team. The students range from undergraduates to PhD candidates and come from computer science, and mechanical and aerospace engineering.

“This competition is good company to be in,” he said. “The top teams in this challenge are well funded and have 30 or more professional engineers, researchers and students, where the core of our team is 10 to 15 graduate students. So our ability to rise to the occasion and compete is something we are truly proud of.”

In a typical hourlong run, the team’s autonomous robots enter the course, scanning for “artifacts,” such as cell phones, hazards or dummies representing survivors. When they find something, they report their location. Because conditions limit the use of GPS, the MARBLE team is using a traditional camera, radar and a laser-based system called LIDAR (light detection and ranging)a to build a virtual map. That map is then shared with a human controller and other robots to help decide which sections to explore again before time runs out.

Identifying, understanding and solving the problems encountered during runs is a difficult and time-intensive process. However, PhD candidate Michael Ohradzansky said it is one of the most satisfying parts of the work.

“I am working on the lower-level control of the vehicle, and I interface with the guys who do planning. We also have people who are working on perception, mapping, artifact detection — all of these pieces have their own system requirements, both physical and in code,” he said. “Everyone comes from a different background and has their own perspective, which is exciting and leads to lots of unique solutions.”

Chris Heckman of computer science is part of the team’s leadership. He said the challenges students face in the competition push the boundaries of several disciplines.

“Fifty years ago, it would have been crazy to think that computer scientists would be working side-by-side with engineers, applying techniques they were developing to robotic autonomy,” he said. “Now, all of our work is interdisciplinary, and I think we’re developing students who will be well-positioned for where our field goes over the next 50 years.”