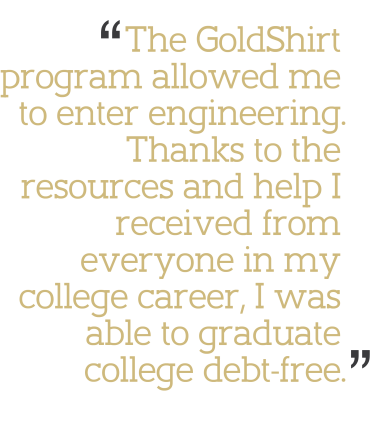 In college athletics, players are often redshirted. They are enrolled but not competing, and that gives them more time to prepare. Tanya Ennis, director of the Engineering GoldShirt Program, says like redshirting, the GoldShirt-ed engineering students are preparing for the rigors of school. “They are pumping iron much like football players” to sharpen their skills.

The GoldShirt Program supports motivated and talented students who need additional math, science and humanities preparation before diving into the full undergraduate engineering curriculum. It is a helping hand from mentors, faculty and staff.

The program was started in the fall of 2009, and the sixth cohort class began the fall of 2014. “We are seeing improvement with each class in academics, mentoring, engagement, research and internships,” Ennis says.

This fall, 106 students were enrolled. In total, 166 students have started since 2009. Many of them are first-generation college students, or women and minority students who are underrepresented in engineering.

A summer bridge program gets students on campus early to adjust to college life. They make lasting friendships and the academic life begins. The freshman year has a custom first-year curriculum that provides 15 credit hours toward an engineering degree.

Elizabeth Lor graduated in May 2014. She says the program was a gateway to success and gave her opportunities that never would have crossed her path, including an internship in her freshman year.

Lor is back at Boulder in the master’s program in computer science in bio and medical informatics. She works for ITS Corp., which provides information technology for the health care industry.

“What attracted me to the program was the good vibe from the directors and the ability to go straight into the engineering college,” Lor says.

Amalia Lopez graduated in May with a degree in chemical engineering. Engineering and the GoldShirt Program changed her life. She moved to the U.S. from the Dominican Republic when she was 11. English was a second language. “The thought of college seemed out of reach,” she says. “The GoldShirt program allowed me to enter engineering. Thanks to the resources and help I received from everyone in my college career, I was able to graduate college debt-free.” She is a production engineer for ConocoPhillips in Houston.

“It is a village of people who are supporting these students to succeed,” Ennis says.