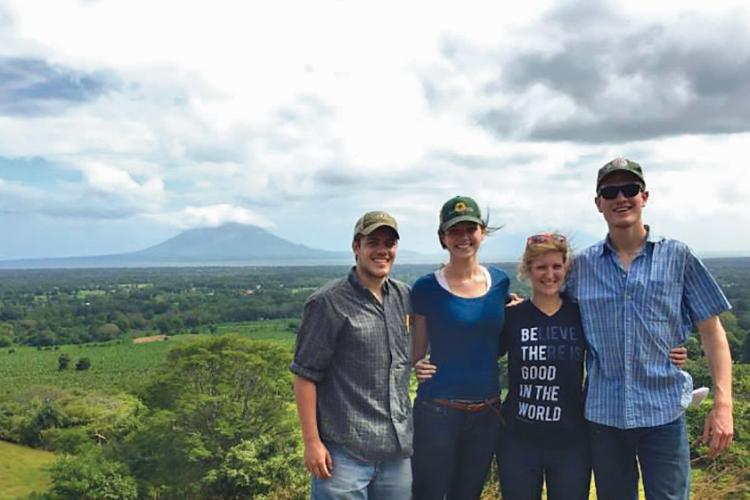 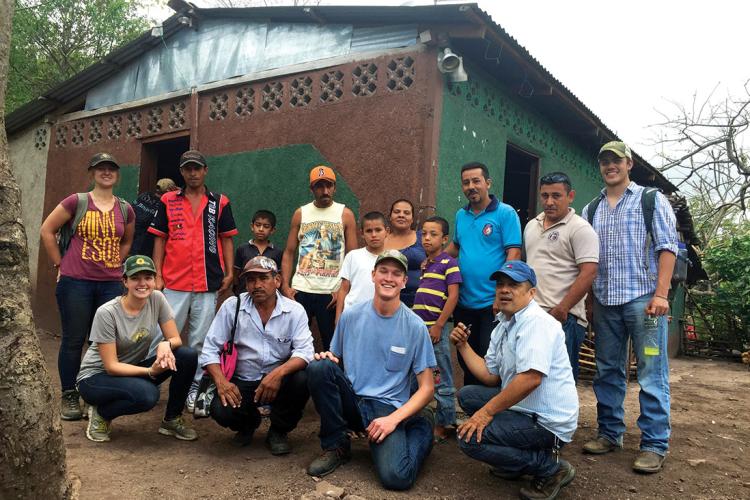 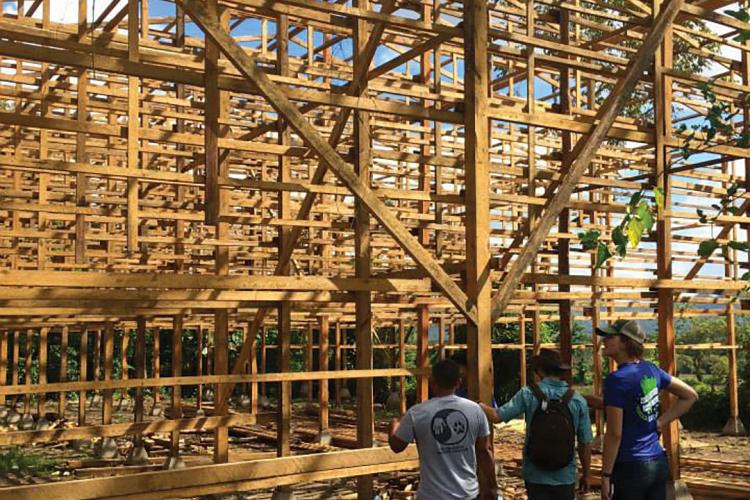 Matthew Tabor, Emily Eggers and Myranda Prentiss talk to a tabacoo farmer about her new building and land

FOUR ENGINEERING STUDENTS FROM CU-BOULDER PACKED their bags and headed to Nicaragua during the semester break. But it wasn’t for the weather. It was strictly business for the founders of SolVia Solar.

The young entrepreneurs had invented a solar collector designed to replace diesel pumps for irrigation in rural areas. Their startup project was one of six chosen in the inaugural year of Catalyze CU-Boulder, a business accelerator program (see article on next page).

For SolVia, the Nicaragua trip was a crucial next step in moving the business venture forward. Taylor Robert Scott (MechEng ’15), from Fort Collins; Emily Eggers (AeroEngr ’15), from Sycamore, Illinois; Kamron Medina (AeroEngr ’16), from Gunnison; and Myranda Prentiss (ApMath and GeoPhys ’15), from St. Paul, Minnesota, spoke to nearly two dozen potential customers and key stakeholders about the benefits of solar power, the initial costs and the environmental impact.

According to Scott, the journey was well worth it. “Our assumptions were validated. We have a lot of work to get done before May” with the business model and financing, Scott says. “The biggest tweak is a possible move to a franchise model.” He adds that the team is also considering moving to monthly payments from farmers instead of harvest-time payments.

SolVia Solar will undergo further product development and beta testing on a Colorado farm in March. The final product is expected to be ready this spring.

Eggers says the trip was the perfect way to execute their plan. She had reservations beforehand, but found it was the best way to understand the market.

The initial idea for SolVia Solar developed as part of an engineering and management class at CU-Boulder.

“Greenpeace challenged experts to submit ideas” to improve the environment, Scott says. With that challenge in mind, he began to work on the solar concept. Because he grew up on a ranch and went on mission trips, Scott says he understands social responsibility. “The real-world impact is important to all of us.”

Prentiss agrees that improving the world for others is important to the team.

“We will be changing the way these family farmers work,” she says. “We will be helping and making farming more efficient.”

Catalyze CU-Boulder came at the perfect time for these four young engineers as they prepare to launch SolVia Solar.

Nearly 40 teams applied to Catalyze CU-Boulder last spring, and six were chosen. The selected teams developed concepts that ranged from glitzy clothes online to plastic polymer orthotics. The winning student groups were given mentors, grants and space at Spark Boulder, a co-working space. The ideas were then launched into entrepreneurial enterprises designed for success. The student-entrepreneurs spent eight weeks developing and clarifying their plans.

Doug Smith, assistant dean for programs and engagement in the College of Engineering and Applied Science, was excited with the participation in the first year.  And it will only get better in the years to come.

Dean Robert H. Davis asked Smith to look into creating a startup accelerator program in February 2014. After researching other programs and working out a budget, they launched a website. “Within a few weeks, there were 35 applications,” says Smith. “By May 9, the six were selected.”

At the end of July, the students presented their business plans to businesses and friends.

“Their pitches were crisp and clear,” Smith says. “It was great to see how they had grown through the mentoring and the seminars with business leaders. The presentations were very polished.”

Ashley Tillman, a student programs coordinator in the Deming Center for Entrepreneurship at the Leeds School of Business, says it was the right time and place for the accelerator. “There is incredible support,” she says. “The campus has a number of programs that have entrepreneurship components and capstone classes that support business development.”

“In addition to the chance to jump-start a business, Catalyze is a tool for personal growth,” Smith says. “We are in the education business.

We want students to have an enriched experience that they can take with them.”