Using Her Powers for Good

Using Her Powers for Good

Susie Gomez-Burgos inspires the next generation of engineers

Outside of the silver screen, heroes don’t wear capes and leap tall buildings in a single bound. Instead, they’re everyday people doing extraordinary things with little fanfare. Take Susie Gomez-Burgos, a senior in the College of Engineering and Applied Science, majoring in technology arts and media, and minoring in computer science. When she’s not studying, she spends much time away from campus inspiring children—Latina girls, in particular—to become mathematics and science whizzes.

“I want to introduce children to this technology world and make it easier for them to get into a STEM field,” Gomez-Burgos says.

Born in San Diego, California, and raised in Tijuana, Mexico, Gomez-Burgos took an early interest in arts and crafts, making boxes and purses and scrapbooking. Her youthful curiosity and creativity planted the seeds of her engineering future, ultimately leading to more useful applications of her skills. 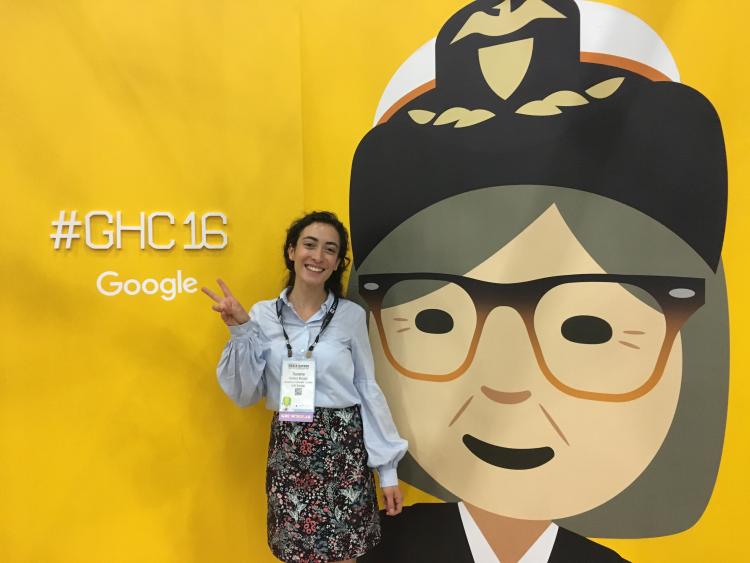 Susie Gomez-Burgos visits with Google at the Grace Hopper Celebration of Women in Computing in Houston, Texas. Networking at the conference led her to an internship with J.P. Morgan.

“Our house was under construction, and we played a lot in it while it was being built,” Gomez-Burgos says. “My brother and I made a pulley system to bring our toys up to the second floor. We made it out of materials in the building.”

A first-generation college student, Gomez-Burgos points to her childhood as a major influence on what motivates her today. She decided from a very young age that she wanted more out of life than a job.

“My parents took jobs they needed just to survive,” she says. “I decided I could learn from their experiences and knew higher education was my path to follow.”

Originally enrolled in environmental engineering at San Diego State University, she decided to make a change and transferred to CU Boulder. A trip to Bolivia in 2015 with Bridges to Prosperity, a nonprofit that provides isolated communities access to essential resources and economic opportunities by building footbridges over impassable rivers, proved to be a turning point.

“We built a footbridge in Bolivia,” Gomez-Burgos says. “That’s when I decided I wanted something more creative. I wanted to design things—useful things—that weren’t necessaril  buildings or structures.”

She soon switched to her current major and hasn’t looked back.

ABOUT THAT “HERO” THING…

While she won’t admit it, Gomez-Burgos is most certainly doing something heroic. She is using her knowledge, skills and talents to inspire the next generation of female engineers through her work with TECHNOLOchicas, a National Center for Women & Information Technology organization that works with K–12 Latina school girls on life lessons and teaches them about technology and computers.

She and her fellow CU Boulder students volunteer once a week as part of the EPIC afterschool club at Alicia Sanchez International School, an elementary school in Lafayette. The afterschool club is a research partnership led by faculty and graduate students from CU Boulder’s School of Education and the administrators and staff at the elementary school. Gomez-Burgos’ fluency in English and Spanish has been an asset for connecting with the children. Though her professional future is not yet written, Gomez-Burgos intends to always motivate kids to embrace math, science and technology.

“Helping kids—and mostly kids who come from nondominant racial, linguistic and socioeconomic backgrounds—is personal and important to me,” she said. “I want to impact kids who come from a similar background as mine, and motivate them to seek education and careers in science and technology.”