After more than 14 successful years as dean of the College of Engineering and Applied Science, Robert H. Davis returned to the chemical and biological engineering faculty in January 2017.

With the conclusion of his tenure as dean, the college is ranked in the top 20 among public universities and is training highly skilled engineering leaders prepared to contend with the significant problems facing the world.

Davis led advances on many fronts in the college. Research awards more than doubled, enrollment of women and underrepresented minority students increased, and programs and campus facilities expanded significantly.

“All that we’ve accomplished, which has been a lot, has been a group effort with a team of wonderful people,” Davis said. “What I’m most excited about is that we’ve been able to accomplish the trifecta of growth in quantity, quality and diversity.”

The college has had a strong history of innovation in hands-on engineering education under Davis’ direction, as exemplified by the Earn-Learn and Discovery Learning apprenticeship programs. The programs have benefited more than 3,000 undergraduate students who learn hands-on techniques, gain insight into a field of study, and learn life skills such as time management and teamwork.

The college launched two bachelor’s degree programs, in mechanical and civil engineering, for students on the Western Slope, in partnership with Colorado Mesa University. The program allows students to earn a Bachelor of Science in engineering from CU Boulder by taking classes delivered in Grand Junction.

Several other new programs were initiated, including the Broadening Opportunity through Leadership and Diversity (BOLD) Center, the Engineering Honors Program, the Engineering Leadership Program and three Residential Academic Programs. Davis championed the creation of nine new undergraduate and graduate degree programs and advocated for the ATLAS Institute to join the college.

Improvement of diversity and quality

Since 2002, the engineering student body has grown dramatically by 74 percent to more than 6,500 total undergraduate and graduate students. The improvement of the college’s national reputation for research has resulted in research awards growing from $38 million in 2003 to $83 million in 2015. Tenure-track faculty positions are up 28 percent, and the total faculty has grown by 56 percent.

Davis was instrumental in the creation of the Idea Forge and the Jennie Smoly Caruthers Biotechnology Building, and he led the college’s expansion to East Campus.

The academic quality and diversity of the student body has strengthened along the way.

In his first full year as dean only 14 percent of first-year students were women. In his last year as dean, the percentage of women has grown to 32 percent. Underrepresented minority students are up to 20 percent from less than 6 percent. The fall 2016 engineering freshman class entered with an average GPA of 3.91 and composite ACT of 30.6, up from 3.76 and 27.8, respectively, in 2006.

Davis’ desire to help students succeed is illustrated in an experience he had with an undergraduate student who came to his office conflicted about her major. The student had not done well in two engineering-related courses and was considering switching her major to biochemistry in arts and sciences or even leaving CU altogether.

In talking with her, he learned that what she really wanted to do was use a technical background in a business setting to help move engineering companies forward. Davis suggested she enroll in the Engineering Plus major and business minor. 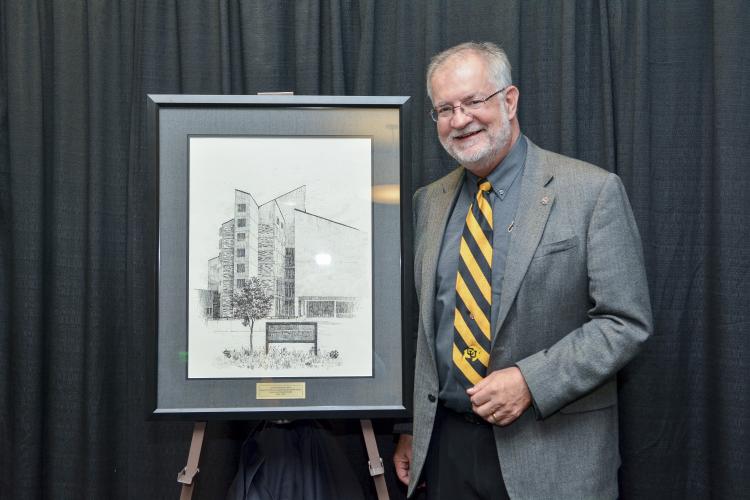 NOV. 22, 2016
On Thursday we honored Dean Robert H. Davis as he prepares to ride into the next chapter. Davis will step down as dean in January and return to the faculty after 14 prosperous years leading our college. Thanks to all who joined us to celebrate Dean Davis’ service!

“I helped her find what she really was enthusiastic about,” he said. “As a result, she stayed in engineering, graduated with honors and got her dream job right out of school.”

During his tenure as dean, Davis saw students become more interested in actively engaging with a world that is more interconnected than ever.

“What I’ve seen that’s different in students today is that they’re much more passionate about the global society,” Davis said. “They’re interested in how engineers can make a difference in the world, whether that’s related to improved sanitation and water, or better healthcare or technology. We have a very bright future because of their global mindset.”

Davis received a BS in chemical engineering from the University of California, Davis in 1978 and completed a master’s in 1979 and a doctorate in 1982, both from Stanford University. In 1982–83, he was a NATO Postdoctoral Fellow in the Department of Applied Mathematics and Theoretical Physics at the University of Cambridge before joining the CU Boulder faculty in 1983. He became dean of the College of Engineering and Applied Science in
July 2002.

For his accomplishments as a leader in the engineering field, Davis holds the Tisone Endowed Chair and has been recognized with a National Science Foundation Presidential Young Investigator Award, an American Society of Engineering Education Outstanding Young Faculty Award and a Guggenheim Fellowship, among other honors.

When asked how he successfully juggled the many demands of the position, Davis replied that he limited the number and length of meetings in a day.

“I block out time to do individual work. My standard meeting is 20 minutes. That seems to be plenty in most cases,” he said, glancing at the clock.

“It’s been an honor to serve as dean and to work with our innovative faculty, staff and students as we advance engineering research and education,”

Davis said. “It’s been fun helping the college grow and getting everybody moving together strategically in the same direction but there’s plenty left for the new dean to do.”