Far above Earth, a curious colony of spacefarers is sharing close quarters on the International Space Station as part of research that could one day help lead us to Mars.

These are no ordinary astronauts, they are mice, and their journey could be key to solving a problem that vexes not just NASA, but also millions of older Americans: bone loss.

You might not think a disease that affects senior citizens would have much in common with the men and women of the space program, most of whom join the astronaut corps in their 20s and 30s, but space has made them unlikely bedfellows. The low gravity environment that makes space travel look so exciting is also responsible for potentially debilitating levels of bone loss.

“In microgravity, astronauts lose bone mass at a rate approximately five times faster than postmenopausal osteoporosis patients. When you are floating in space, you have no gravitational load on your skeleton,” says professor of mechanical engineering Virginia Ferguson, who is studying the issue.

Astronauts onboard the ISS spend 2.5 hours exercising every day to combat bone loss, but it only slows the degeneration. On a mission to Mars, which could last anywhere from one to three years, that is a serious problem.

“When we send astronauts to Mars, will they have enough bone to support their weight when they land? We have to ensure the answer is yes,” Ferguson says.

That is where the mice come in. 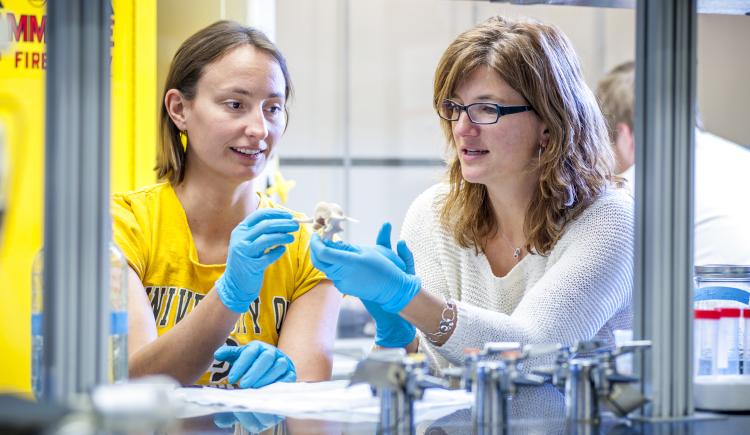 Despite their tiny size and furry appearance, 99 percent of their DNA is identical to humans, and their internal organs have similar physiology to ours. It makes them ideal for this sort of project. They only spend 21 days in space, but because mice have shorter lifespans than people do, three weeks can be the equivalent of three years.

“Only by better understanding the effect of microgravity on the body can we better develop countermeasures,” says Alicia Ortega, a post-doctoral researcher in Ferguson’s lab. “I am learning first hand the complexity of working with biological materials. So much is still not understood.”

That missing knowledge is especially surprising when you consider that men and women, and mice, for that matter, have been going to space for 50 years. Unfortunately, previous research typically featured juvenile mice, which first year PhD student Jennifer Coulombe says presents an obvious problem.

“The humans we send into space are not teenagers. If the mice are still growing, it’s not the best model for comparing to astronauts,” she says.

Ferguson’s research aims to determine how quickly bone loss occurs and if it eventually hits an equilibrium and levels off. Early data suggest that it may, but Ferguson emphasizes more study needs to be done.

While NASA is interested in the results of the work to help astronauts, future medical advancements could benefit people far outside the space programs. Very few Americans have been to space. Far more suffer from age-related bone loss.

“My kids tell people, ‘My mom had experiments in space,’ they don’t talk about osteoporosis,” Ferguson says. “For me this is about both issues. This biomedical research could be important to everyone.”