Home 2017 Issue CubeSat of the Year

CubeSat of the Year

Home 2017 Issue CubeSat of the Year

CubeSat of the Year

A new era in space exploration

What does it take to create a satellite and send it to space? A lot of work, and until very recently, a decadelong time frame and $100 million or more. That’s all changing, and to say it’s been a radical shift almost understates the difference.

Meet MinXSS, a satellite that went from concept to launch in three years and for 99% less money. That’s not a typo, it really was that much less expensive. It entered service in May 2016 and is orbiting the Earth at an altitude of about 250 miles, passing over Boulder six times a day.

MinXSS, pronounced “minks,” like the furry woodland creatures, is a CubeSat, a picosatellite no larger than a loaf of bread that was designed and built by students. Don’t let its size and origins fool you; it is collecting real scientific data just like its larger orbiting cousins.

“Developing bigger satellites, designers have to focus on specific tasks, like one subsystem or specific data analysis task, because the entire endeavor can take 10 years. CubeSats that are much smaller and with a development time of only a couple years can be built and designed by students and be successful,” says Tom Woods, principal investigator and associate director of the Laboratory for Atmospheric and Space Physics (LASP) at CU Boulder.

It’s part of what drew James Mason, then an aerospace engineering sciences doctoral student, to the project. 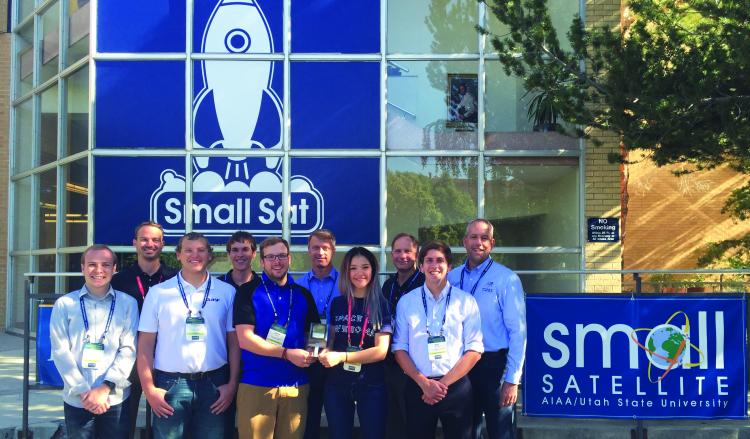 MinXSS was selected as the 2016 Mission of the Year at the American Institute of Aeronautics and Astronautics Small Sat conference.

“I knew it was a very rare opportunity to work on hardware that would get launched in the timeframe of my PhD. It feels surreal to work on a project that goes into space. A part of me doesn’t believe that the battery pack I built up is keeping a satellite alive,” says Mason, now a professional research scientist at LASP.

This new era of smaller, inexpensive satellites is being made possible by increasing commercial access to space and the ever-present push to make all new technology smaller.

“The size of the X-ray detector now is no bigger than a thumbnail. That’s a huge difference,” Woods says.

Another key breakthrough has been the development of a new attitude control system, which is used to accurately point the satellite in space. Blue Canyon Technologies, a startup founded by CU Boulder aerospace graduates, created the first high-accuracy system small enough for a CubeSat and donated it to the project.

MinXSS is being partially funded by NASA, which sees small satellites as a way to train up-and-coming engineers, but aerospace engineering sciences professor Scott Palo says CubeSats are more than just educational tools.

“We are developing new engineers for NASA and industry who have already been through the lifecycle of a satellite from concept to operation, but if this was just a training program, it wouldn’t last. We’re combining learning with valuable scientific measurements,” Palo says.

What are those scientific returns? MinXSS is studying the X-ray spectrum of solar flares, which impact the behavior of Earth’s upper atmosphere. The information collected so far is still being analyzed, but the project is already receiving recognition.

In August, MinXSS won the Small Satellite Mission of the Year award at the 2016 American Institute of Aeronautics and Astronautics Small Sat Conference. The project was the people’s choice at the conference and was confirmed by a panel of satellite experts.

CubeSats represent a new era in space exploration. The technology is taking something that was done a certain way for five decades and doing it so differently and for so much less cost it’s changing the entire industry. It’s a seismic shift for aerospace, both on and off campus, Palo says.

“CubeSats are a fundamentally disruptive technology.”