Home 2016 Issue Dreams for the Sky

Dreams for the Sky

“It was fascinating and I knew I was on board,” says Frew, who is also director of the Research and Engineering Center for Unmanned Vehicles. “But, as we worked together, it became clear to me that communication was critical. In a lot of academic work with unmanned aircraft, communication is looked at as a barrier to be overcome. In contrast, here we said, ‘Let’s view communication as the application itself.’ There are many reasons to do this—think about a UAS being of help in New Orleans during Hurricane Katrina.”

The researchers got further involved with weather and drones when they proposed a small project to the National Science Foundation as part of the project VORTEX2. “In spring 2010 we were able to spend six weeks in the field doing actual storm chasing with a team of over 100 scientists,” says Frew. “We would get up, check the weather reports, drive six hours, fly our aircraft, see if a storm evolved into a tornado or not and start the whole thing over the next day.”

Through that work, Frew says, the University of Colorado group was the first to sample the rear flank downdraft of a supercell thunderstorm, looking at the theory that atmospheric activity in the rear flank downdraft leads to the formation of tornadoes. “In June 2010, we flew in six of these storms, and one of these storms produced tornadoes before we were in it,” he says. “The main accomplishment was that we demonstrated that you can use drones to do this kind of investigation.”

Collaborating with other universities, they went on to exploit wind proactively and close decision-making loops around modeling and wind data in the environment. “VORTEX2 was only about flying the aircraft in the storm using GPS,” says Frew. “We did not deploy any intelligent decision-making technology. With our more recent efforts, we were able to measure the winds in the atmosphere using dual Doppler radar so that we could get a three-dimensional reconstruction of wind while in the air, use that to seed models of what’s happening, and from there plan the aircraft trajectory to take advantage of the wind energy—like birds or glider pilots will do. Compared to our UAS in VORTEX2, we’ve now added some autonomy and intelligence to this system.”

The researchers were awarded $2 million from the National Science Foundation National Robotics Initiative to apply this concept to do targeted observation. “Now we want to better understand and better predict tornado formation,” Frew says. “The question is, can we make the aircraft an autonomous scientist?” This work formally started Jan. 1, 2016, and the project should culminate in flight-testing in Tornado Alley in summer 2018. 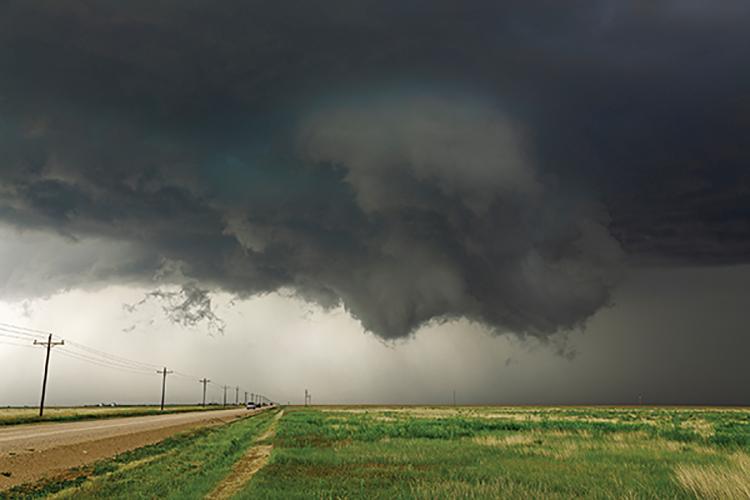 An Eye Toward IRISS

Then there’s the Integrated Remote and In Situ Sensing (IRISS) Initiative, part of the CU Grand Challenge, a gauntlet thrown down in 2015 to improve aerospace technology for societal good. Teaming Frew and Argrow as leaders, it has multiple benefits.

“The idea is to couple remote sensing with UAS and other ground sensors,” Frew says. “This will create new levels of targeted multiscale sensing.”

The commitment for IRISS is roughly $2 million in the first year to develop infrastructure in areas such as more sophisticated deployment capabilities, ground vehicle support, piloting and staff support.

Through IRISS, projects being focused on include raising awareness of UAS in the business and law schools, working with a miniature radar system that can detect soil moisture, teaming with the geography department to understand ecosystem health, helping the anthropology department utilize drones to visit archaeological sites without disturbing them, and launching a new weather project that will partly look at the forward flank of storms.

“Between building on our weather work and so much involved with IRISS, the school’s future with drones looks bright,” says Frew. “But there is still much more to prove.”