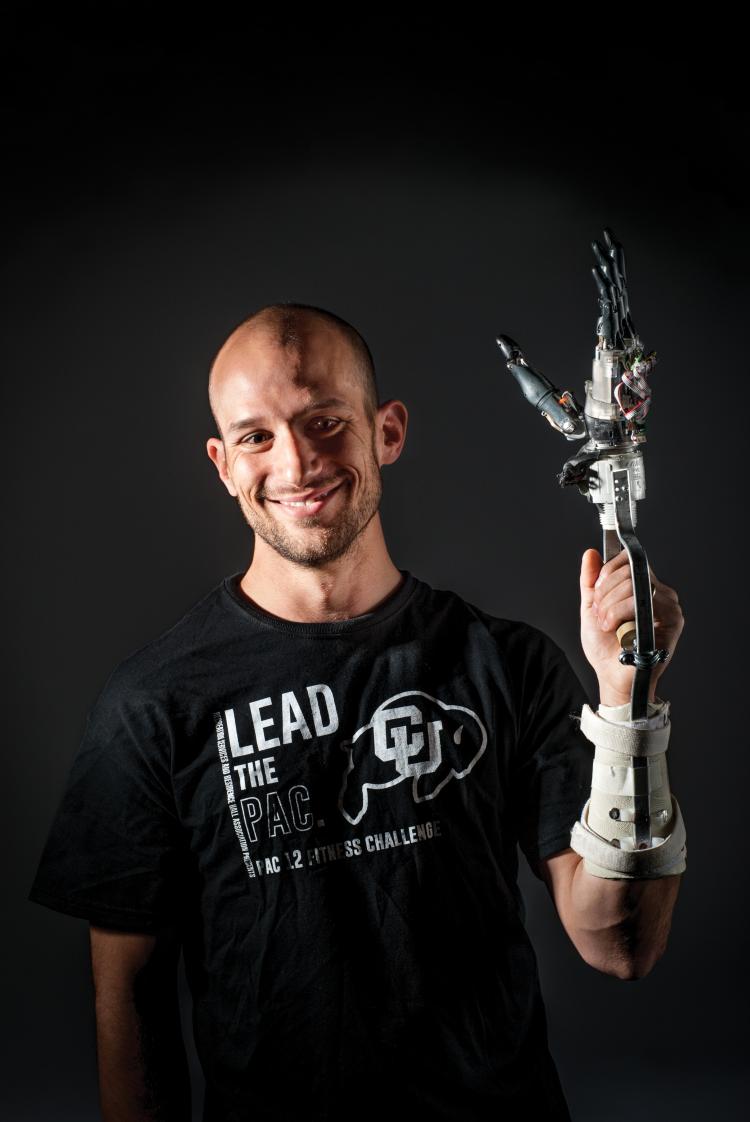 Prosthetic limb designer helps clients get back to the business of life.

Jacob Segil meets some interesting people in his line of work.

Segil, an instructor in the Engineering Plus Program and the Department of Mechanical Engineering, has been collaborating with research groups around the world in recent years to design prosthetic limbs to be as functional as possible, some including sensors that allow clients to experience a sense of feeling in their bionic fingers.

As part of the research, Segil and his colleagues recruit clients to come to the lab and test new designs of externally powered myoelectric hands controlled with electrical signals generated by the user’s residual limb muscles. One was Aron Ralston, an outdoorsman who became internationally famous after he was forced to cut off his right forearm during a canyoneering accident in Utah in 2003 in order to save his own life. Ralston, a Colorado native, was the subject of the movie 127 Hours.

Another was Tom Southall from Steamboat Springs, Colorado, who was born without a right arm below the elbow but was named the Colorado High School Athlete of the Year in 1981 for his astonishing prowess in four sports. He now teaches and coaches at Cherokee Trail High School in Aurora, Colorado.

“All of the people we work with are remarkable, and many have stories about something that went terribly wrong, and how they recovered,” says Segil. “It is very meaningful work for me.”

Segil’s research—much of it in the BioMechatronics Development Laboratory at the University of Colorado Denver, directed by Professor Richard Weir, his former doctoral advisor—involves all aspects of designing and building myoelectric limbs. That includes creating new prostheses or adapting existing commercial models, developing new sensor technology to better measure and understand signals between human muscles and prosthetics, and developing new software, including unique algorithms, to improve their function.

The myoelectric hands Segil and his colleagues build typically are attached to custom prosthetic sockets integrated with high-tech sensors that can be slipped onto residual forearms and can relay signals between muscles and tiny computers in the hand. The myoelectric hands also are implanted with mini-motors that allow for the rotation of individual fingers and thumbs, allowing users to grasp objects like pennies.

One promising new design is a bionic hand with sensors on the tips of the index and middle fingers. When one of the sensors on a fingertip, for example, comes in contact with an object, it instantly relays a “touch” signal to a particular stimulator on a residual limb muscle, vibrating atop it much like a tiny phone. “We have found that just a small bit of information can allow people to better integrate their prosthesis into their body image—something we call embodiment,” Segil explains.

Segil and his colleagues often work with prosthetics companies, adapting their products using novel electronics and software that allow users to communicate with their prosthetic hands in more intuitive ways. “What we are doing that a lot of groups aren’t is focusing on clinical needs,” he says. “We want our research findings to be deployable and ready to be used the day they are done.”

“I have always been impressed by Jacob’s proactive, go-getting approach to things,” says Weir, who has collaborated with Segil for more than seven years.

Segil, who teaches several undergraduates courses, says the people he and his colleagues work with show enduring will and the dogged determination to get back to their normal lives. “It is a powerful testament to the human spirit,” he says.

On the Grid
END_OF_DOCUMENT_TOKEN_TO_BE_REPLACED
Return to the top of the page