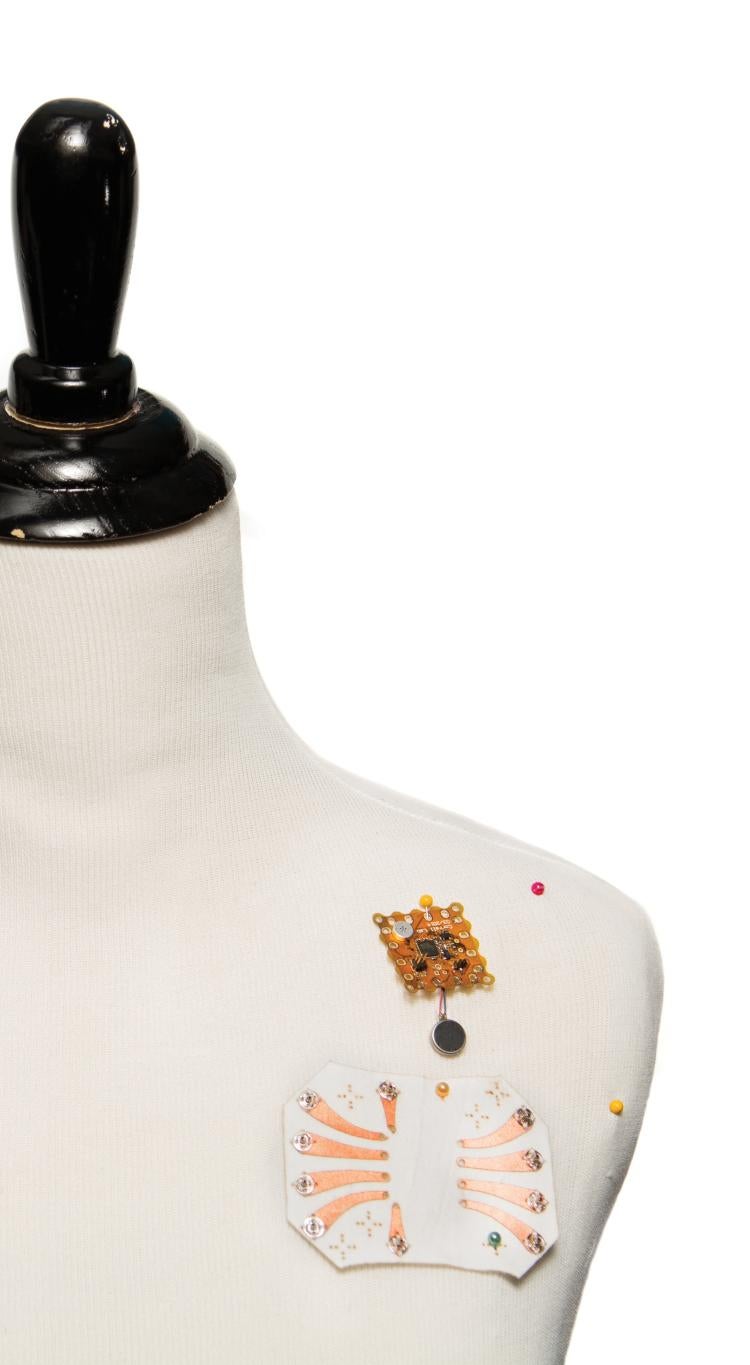 Halley Profita and Dana Hughes could have spent spring break playing outside. Both were drawn to Colorado’s outdoor activities when choosing CU-Boulder for their doctoral studies. Hughes and his wife like mountain biking; Profita and her boyfriend enjoy hiking Colorado’s lofty peaks. But these computer scientists spent their 2014 break in the lab and landed on the path to a patent.

Profita, a human-computer interaction researcher studying wearable computing, presented a problem to her labmate: a touch jogwheel interface she had integrated into fabric wasn’t waterproof. It’s a common problem that wearable interfaces aren’t designed to withstand the elements.

Similar issues have plagued the wearables industry for years. Heavy, clunky batteries need to be charged. Devices heat up and become uncomfortable.

Hughes, with his background in electrical engineering, suggested using radio frequencies for the needed communication.

In a cross-discipline environment like the Correll Lab, engineers are making devices and sensors sleeker, smarter and more automated as materials become smaller and lighter.

Professor Nikolaus Correll, their advisor, says Profita and Hughes represent the diversity he has tried to foster in his lab.

Their collaboration progressed quickly, and in two weeks the pair produced a paper and prototype interface that recognizes swipes and taps, can be sewn along a garment seam and can be weatherproof.

Among its many possible applications is intuitive, eyes-free wireless control of devices such as a phone or media player hidden away in a jacket during outdoor activities.

The university’s Technology Transfer Office helped them file a patent application and investigate commercial interest. Participating in the university’s annual New Venture Challenge, the pair connected with a backer who bought the rights to the design.

As of spring 2016, the provisional patent has been converted to a full-fledged, or Patent Cooperation Treaty, application, and gaugewear Inc. will market the technology as SwitchBack.

Profita found her niche in wearables while completing her master’s degree in industrial design and helping a team create the Mobile Music Touch glove. Initially designed to teach music, the glove vibrates on the appropriate finger as the wearer learns to play a part on the piano or other instrument. The Mobile Music Touch was then appropriated for rehabilitation purposes as an engaging way to help individuals with quadriplegia improve dexterity.

“That device solidified my desire to pursue wearables,” she says. She saw the power of merging textiles and technology.

Profila wants to eliminate the unwanted attention sometimes associated with devices designed to help those with disabilities. Hearing aids, for example, have a high abandonment rate.

To combat that, Profita and another labmate, Nicholas Farrow, created a smart garment called “Flutter.” A network of embedded microphones and small vibrating winglets line the periphery of this dress and tell the wearer the direction and intensity of incoming sounds. The design could help those with hearing disabilities sense and locate car horns or emergency sirens. Flutter won first prize in two categories at the 2012 International Symposium on Wearable Computers.

Wearables reflect personality, Profita says. “Can we make something beautiful leveraging these new materials? We can make them fashionable accessories rather than highlighting one’s disability.”

Hughes’ path to computer science took another route. After completing his undergraduate degree in electrical engineering, he became interested in materials science and nondestructive testing in graduate school. He saw the value of computer science and machine learning to sift through test data.

His research now is focused on extending the capabilities of civil and aerospace structures using robotics and machine learning, such as an airfoil capable of self-repair and changing shape. In the aerospace industry, humans must look for hairline cracks on wings and fuselages every six months to avoid catastrophic failures, but Hughes wants to use embedded sensors and artificial intelligence to conduct these routine tests automatically and continually.

“What sort of cool physics tricks can we do to find these defects?” he asks.

Hughes says computer scientists also can be aerospace engineers, biologists and linguists. “It touches so many fields. It lets you be whoever you want to be and still make huge impacts.”

When he finishes his doctorate in 2017, Hughes hopes to continue working in academia.

Profita, who plans to finish her doctorate in 2016, is interested in the wearable research divisions of companies such as Microsoft, Samsung and Google. 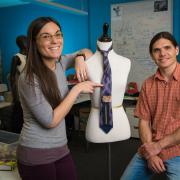 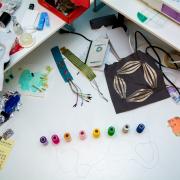 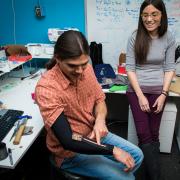 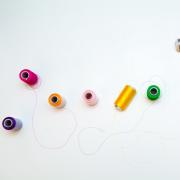